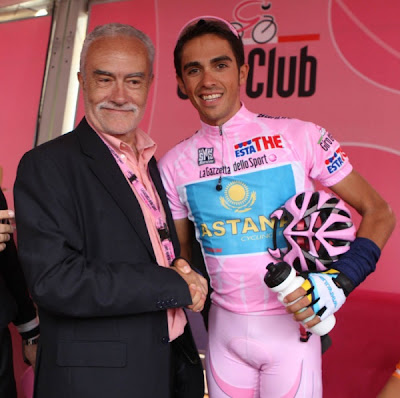 Vuelta organizer Victor Cordero knew he had a great show in the works when Contador took the Giro's maglia rosa in June.

Astana brings a loaded team looking for nothing short of domination in the 63rd Vuelta a España that opens with a team time trial Saturday in sunny Granada.

Still miffed it was left out of the 2008 Tour de France, the Astana blue swaggers into Granada with its A-team for the season’s third tour with overall victory as the main objective.

Andreas Klöden and Levi Leipheimer provide heft to the nine-man lineup, but it’s budding Spanish super star Alberto Contador who will be captain of this ship.

“It’s always good to have various options, just in case some surprise happens, but it’s also good to have a clear idea of things. Alberto will be our only leader on the team,” Astana manager Johan Bruyneel told Spain’s sports daily MARCA. “Alberto is the only one of our leaders who know what it’s like to win a grand tour.”

After coming off the beach to win the Giro d’Italia back in May, Contador will be taking aim at his second grand tour victory of the 2008 season, but with better preparation.

Unlike the Giro, which gave Astana a surprise, last-minute invitation to start just eight days before the opening stage in Sicily, the Vuelta has been on the team’s radar screen for months.

Contador has prepared well for the three-week Vuelta and, with the absence of defending champion Denis Menchov (Rabobank), lines up as the pre-race favorite.

Bruyneel said there’s no worry that the team’s top riders might begin to fight internally for control of the race.

Leipheimer and Klöden both boast Tour podium finishes on their resume, but Bruyneel insists that the team will ride as a unified front.

“The Giro victory was decisive for everyone to understand that Alberto, when he’s good, he’s the best rider for grand tours,” Bruyneel said. “Also, he’ll be racing on home roads and the team is interested in having a Spanish winner.”

When Tour organizers snubbed Astana for this year’s edition, the Vuelta increased in importance both for Astana and Contador.

Elite company
With his unexpected Giro win already in the bag, Contador enters the Vuelta with perhaps less self-imposed pressure, but perhaps more media pressure to perform. Winning this year’s Vuelta would put Contador atop an elite cadre of cycling greats.

Only four riders have won all three of cycling’s major three-week tours and Contador is poised to become the rider to achieve that hat trick within the shortest amount of time.

Eddy Merckx, who holds the record with the most grand tour victories at 11, won five Tours, five Giros and one Vuelta from 1969-1974.

Bernard Hinault currently holds the record for claiming all three within the shortest time frame, winning the first of five Tours in 1978, his first of two Vueltas in 1978 and one of three Giros in 1980, within a period of 26 months.

Contador will be under the gun to become the first Spaniard to earn that distinction and to do it on his home roads.

Contador’s profile is flying sky high right now in his native Spain, and he will be keen to beat back 2008 Tour winner Carlos Sastre (CSC-Saxo Bank) and Alejandro Valverde (Caisse d’Epargne) in what’s expected to be an all-Spanish showdown for the Vuelta crown.

A strong and unified team
Leipheimer and Klöden provide the team with guarantees and shouldn’t be discounted for anything, especially Leipheimer, who is fresh off winning a bronze medal in the Olympic time trial and an impressive victory in the Clásica a los Puertos last weekend in the mountains north of Madrid.

Supporting the three leaders will be a solid lineup of support riders, including two Kazakh riders to keep the title sponsor happy, as well as José Luis Rubiera, riding in his last major race before retiring at the end of this season.

“This will be my 20th and final Grand Tour. I am very grateful to all the riders, staff, sports directors and fans who have supported me throughout my entire career,” Rubiera said on the team’s web page. “It is a true honor to have had the opportunity to race for Johan, Lance (Armstrong) and now Alberto. It has been a dream and I would love to complete my career with another grand tour victory.”
Posted by Recovox at 10:47 AM