Lezak's Swim Is One For The Ages 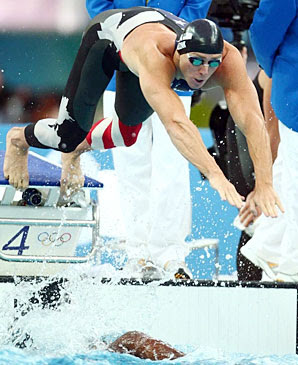 BEIJING -- Qin Shi Huang built the Great Wall of China more than 2,000 years ago, but the guess here is China's first emperor, guarded in his eternal repose by a terra cotta army, did not actually do the brick-and-mortar work himself. If there is a lesson in the murky past of the Middle Kingdom that can be transferred to the architectural confection known as the Water Cube, it is this: If Michael Phelps wins a record eight gold medals in the capital this week, it will be the toil of Jason Lezak that made the difference.

There has never been a glut of Lezak magazine covers, Lezak soft focus TV features, Lezak mania. Although he is a well-regarded figure among the chlorine crowd -- he is a first-rate relay swimmer who set the American 100-meter freestyle record at the U.S. trials -- Lezak never has been an A-lister for the Today Show. The truth is there was nothing in his past that would suggest he was capable of transcendence, of laying down a feat that would propel him into the American sporting pantheon.

Historically the Olympics will belong to Phelps, the Qin Shi Huang of the pool, but the incandescent moment belonged to a 32-year-old swimmer who Monday turned in, arguably, the greatest swim in American history.

With Phelps' quest for an unprecedented No. 8 about to fizzle practically before it started -- the 4x100 freestyle relay was his second final in a week that was busier than a Beijing rush hour -- Lezak tapped into something in himself that the world, and he, had never witnessed before. Swimming the anchor leg, Lezak, trailing by about a body length as they turned for the final 50 meters, ran down Alain Bernard, the world record holder, one of the Four Frenchmen of the Apocalypse, in the final 15 meters. He then out-touched Bernard at the wall by eight one-hundredths of a second, giving the Americans, and Phelps, the leadoff swimmer, the victory and the world record. In setting the new standard by nearly four seconds, Lezak swam 46.06, the fastest split in history by almost three-quarters of a second and faster than Bernard's by two-thirds of a second.
In less than a minute, Lezak had alchemized a leaden career -- he didn't even qualify for the 100-meter final in Athens four years ago -- into pure gold.

"I just happened to have the swim of my life at the right time," Lezak said.

"The whole thing was remarkable," said Orjan Madsen, the German head coach. "It was one of those moments where you just sit back and say, 'Jesus Christ.' If I wouldn't have seen [Lezak overtaking Bernard] with my own eyes, I wouldn't have believed it."

"There's never been [an anchor swim like that] in my memory," American head coach Eddie Reese said. "Not running down somebody who holds the world record, who's on their game. That was incredible. ... It has to be in the unbelievable category. That's the biggest word I know."

American swimmers have had similar success in hunting down formidable big game at Olympics relays, notably Bruce Hayes catching West Germany's Michael Gross in 1984 and Klete Keller rallying and then holding off charging Australia's Ian Thorpe in 2004. Of course, those were in anchor legs of the 4x200 and didn't involve Mr. Phelps, whose snappy 47.51 opener -- it surpassed Lezak's American record -- could be a harbinger of good things to come in the 200 freestyle here. Phelps' presence on the relay magnifies everything, which elevates Lezak's swim from riveting to all-time. Lezak, the oldest male swimmer on the U.S. team, is too far removed to steal a show that long ago was centered on Phelps, but, given the stakes and the scene, his pedal-to-the-gold medal swim is the fulcrum of history.

"Jason is the most phenomenal closer I've ever seen in my life," said Cullen Jones, who swam the third U.S. leg. "He's been able to get his hand on the wall from behind, from ahead."

Trailing by almost sixth-tenths of a second when he dove into the pool -- his .04 reaction time was the second fastest of 24 exchanges in the race -- Lezak actually lost tenths of a second on the outgoing 50. Then on the back end of the race, with Phelps' unique place in Olympic swimming history in the balance, he began to reel in the Frenchman, creeping closer to Bernard's lane and drafting as if he were tailing former Formula One star Alain Prost.

"It's happened to me all my career that people would get on my lane line and suck off me," Lezak said, "so I figured this was one opportunity in all my career to do that. ... I'm not going to lie. When I flipped at the 50, it really crossed my mind for a split second that there was no way. Then I changed. And I said, You know what, that's ridiculous at the Olympics. I'm here for the United States of America. I don't care how bad it hurts or whatever. ... Honestly in five seconds I was thinking all these things. I got like a supercharge and took it from there."

If the French had been talking about smashing the Americans -- this seems to be an urban legend, but if Bernard did say something to that effect prior to the race, French technical director Claude Faquet said, "I think he got it wrong" -- this was their comeuppance. But Faquet was philosophical in defeat.

"I am neither shocked nor disappointed," he said of Bernard's failure. "[Lezak] is a swimmer with a huge amount of experience and he swam intelligently. As far as I'm concerned, it is not Alain Bernard who lost but the Americans who won."
Posted by Recovox at 7:59 AM