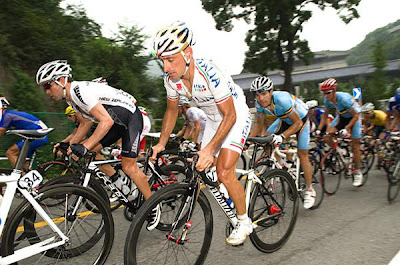 The Olympic road race course, like most cycling events, was to be free access for most of the route allowing fans to catch a glimpse of their countrymen or favourites without having to purchase a ticket. Yet when cycling enthusiasts and even family members of riders tried to get into the venue, they were turned back by Chinese security.

According to ABC online, some fans, who had walked for hours in the stifling heat, took matters into their own hands and broke through security fences and shouted at the officials that they wanted to see the cycling.

The Sydney Sun-Herald reported that the wife of Australian Cadel Evans was one of those turned back by security. Chiara Passerini, Evans' Italian wife, climbed a 10-metre wall to wave the Australian flag in support of her husband. The family of Mattew Lloyd took a different route, and paid off security to get in.

"We arrived here and the policeman didn't want us to stay, he wanted us to stay behind a fence, so we jumped on the other side of the fence and climbed up on this wall," Passerini said during the race.

"The policeman didn't know what to do and he looked like he panicked almost, so we just stayed here where we are and didn't move and we're still here. It's fantastic! ... I think there's just a little bit too much control, though. It's a bit ridiculous."

The lack of spectator access is not only concern to the fans, but to the riders as well. Stuart O'Grady was disappointed when his wife travelled all the way to China only to watch on TV. The lack of cheering fans made an already difficult race harder. "It was like silent murder," he told FoxSports.

"The pain was there but there was no screaming no cheering so it was very bizarre," he said of the closing circuits. "The Tour de France is popular because it is free to the people and the people have close access. I think that probably got in the way of their ideas of controlling people here."

Officials reportedly will ask the Chinese to relax their security to allow more fans on the road side for the time trial, but fans hoping to catch Sunday's women's race may still face some of the same difficulties.
Posted by Recovox at 3:51 PM