Fabian Cancellara: Everything Came Together 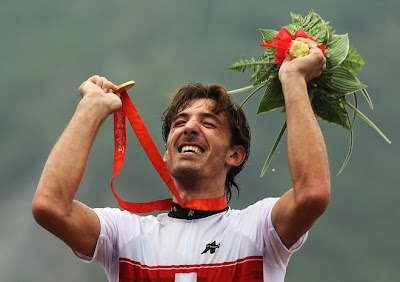 Team CSC Saxo Bank's Swiss tempo phenomenon Fabian Cancellara is double time trial World Champion and last year he laid the foundation for seven days in yellow during Tour de France with a strong prologue in London. If you also add a string of other victories in various races Cancellara has almost come full circle within the time trial discipline. All he really needed was an Olympic Gold Medal......up until this Wednesday afternoon in Beijing.

"It was a perfect day. Everything came together for me. I've been preparing for this as well as I possibly could and I've sacrificed a lot to get here, so I didn't have any excuses in case it didn't work out today. Now I'll finally be able to return home with both a Gold and a Bronze Medal," said a relieved and happy Cancellara.

Although Cancellara was beat twice by Stefan Schumacher during Tour de France the bookmakers all agreed on the fact that the defending World Champ was the main favorite on Wednesday, and as it turned out it only took him one lap for to catch up with Schumacher, who had started a minute and a half ahead of Team CSC Saxo Bank's Swiss rider.

"I knew that many saw me as the favorite and that can sometimes be hard, so I'm definitely proud of my performance. Of course it gave an extra boost to catch up to Schumacher, but I had my own agenda so it didn't change anything as far as my approach went," continued Cancellara.

One of the sacrifices Cancellara has made in order to reach his goal has been not seeing his family much this summer, because he had to leave for China together with a Swiss marathon runner right after Tour de France.

"By going to Beijing early I gave myself the chance to get over my jetlag properly and relax mentally before embarking on the final preparations. But I would never have been able to do this without all the support from both my family, Team CSC Saxo Bank and all the Swiss fans down here," concluded Cancellara.
Posted by Recovox at 8:32 PM