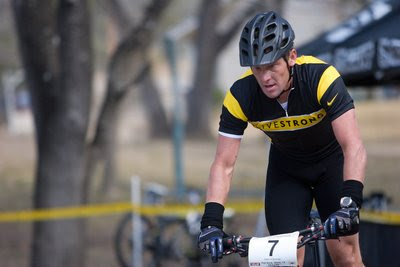 Lance Armstrong on Wednesday downplayed his chances of winning the Leadville 100 mountain bike race this weekend, saying a top-five or "on a good day, top-three" finish is more likely.

"I'm not in it to win it, as they say," Armstrong told reporters in a conference call from Aspen, Colorado, where he has been vacationing and training for the 100-mile race, which starts in the considerably-less-posh nearby community of Leadville.

Armstrong said he's been training on and off road, and also has been hiking and running a bit as he focuses on adjusting to the altitude in the Colorado high country. The Leadville race starts at more than 10,000 feet elevation and tops out above 12,000 feet.

He said he wasn't sure if he is fully acclimated. On race day he will have spent 14 days at altitude.

"It's hard to say because I've never spent more than two weeks here. I feel a lot better than I did the first week," he said. "I'm not sure anyone ever feels good at 12-five."

He said he's been training with an eye toward Leadville for the last five or six weeks.

"I don’t know how competitive I can be," he said. "It's a nice goal to have, it keeps me serious, keeps me fit."

"Really, a race like this takes a lot of experience and a lot of endurance, too, and he has that."

Pushed to predict his finish time for Saturday's race, Armstrong said he thinks he'll come in in the neighborhood of eight hours, or about an hour behind the winner — which at Leadville equates to about fifth place.

"I fully expect to get beat up," he said.

He did, however, engage in a little trash talk with coach Chris Carmichael, a Leadville veteran who will compete again this year.

"I know I can beat Carmichael. I will be home and showered and probably three beers in by the time Carmichael makes it in."
Posted by Recovox at 2:05 PM