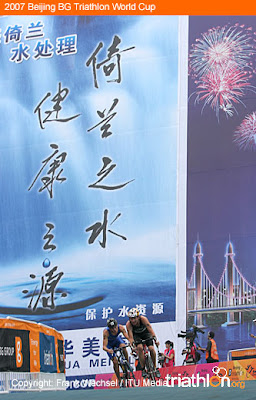 Many teams have already assembled in their pre-Olympic preparation camps around the world. A large number of federations have chosen Jeju island in South Korea to set up camp before flying to Beijing. Jeju’s close proximity to China, relative seclusion and hot conditions offered an ideal setting for pre-Olympic camp. At Tongyeong BG Triathlon World Cup in April, many athletes took the opportunity to visit the island and check out the surroundings. Great Britain, Switzerland, Spain and Germany are among the high-powered teams in Korea preparing for the biggest race of the year.

The women’s triathlon at the Olympics will take place on Monday August 18th at 10am local Beijing time (UTC/GMT +8 hours). The men’s competition will be staged the next day on Tuesday August 19th at the same time. North American triathlon fans will be able to enjoy the Olympic races in primetime (7pm Eastern Standard Time and 10pm Pacific Standard Time) while fans in Asian, Australia and New Zealand can tune in during the early afternoon to catch the triathlons. Unfortunately Europeans will have to wake up before dawn to see the competitions live.
Posted by Recovox at 11:08 AM