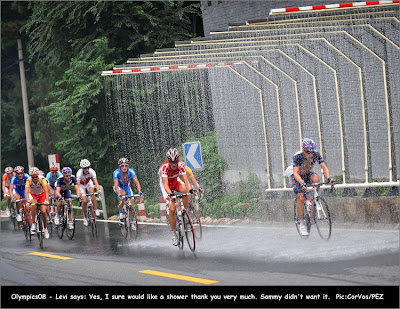 The Summer Olympics take place during, well, summer. And that usually means hot to extremely hot weather. Thanks to scientists like myself, we now have better insight into just how that affects our exercise capacity. At the same time, multiple cooling interventions have been tested and used by different athletes. One potential strategy is to cool athletes in between exercise bouts. Is this scientifically valid and is it practical for cyclists?

To summarize a philosophical debate I had with my brother earlier this summer, here’s what I’ve learned so far in 17 years as a graduate student and scientist in temperature regulation and humans working in extreme thermal stress:

Humans don’t really like being too hot, and can’t exercise as well.

At the same time as gaining better understanding of the mechanisms behind why our physiology becomes negatively impacted by heat, scientists, ergonomists, and coaches have also worked on developing strategies to help athletes and workers to cope better with work and exercise in hot conditions. One of the most popular and visible strategies in cycling, thanks to Team Slipstream (now Garmin’s) use prior to their winning ride in the Giro TTT, has been pre-cooling and the use of cooling vests during warmups.

As I’ve detailed in my first ever Toolbox article back in 2002, the concept of pre-cooling prior to exercise in the heat is not new, with the Aussie rowers among the first to use the garments at the 1996 Atlanta Olympics. The concept is to gain the muscular and metabolic benefits of warming up, but to keep the core body temperature from rising as much as possible. For the large part, scientific consensus is pretty clear that pre-cooling is an effective countermeasure, both extending time to exhaustion at a set workload and improving time trial performances in the lab.

An adjunct to pre-cooling has been the incorporation of cooling in between bouts of exercise, as may happen in between periods of many team sports. In cycling, this may be considered as a recovery tool between days of hard training or racing, multi-stage days, or else in situations such as multiple track racing heats. In conjunction with possible metabolic benefits from helping to flush out metabolites from the muscles, cold-water immersion (CWI) may cause a more rapid recovery in body temperature, alleviating physiological stress from subsequent bouts of exercise. Certainly, rapid CWI into water that is as cold as possible has been found to be the best method to rapidly and safely cool down victims of heat exhaustion or heat stroke, as the primary priority is to drop body temperature from dangerous levels (1).

Vaile et al. 2008
The efficacy of CWI in between bouts of hard exercise was the focus for a 2008 scientific study (2) from the Australian Institute of Sport and colleagues from Australia and New Zealand, published in the Journal of Sport Sciences. They aimed to compare different CWI protocols, including different temperature water and also intermittent versus continuous CWI during the recovery period. In addition, they compared these strategies to the common practice of “active” recovery, consisting of mild exercise. While active recovery can be beneficial in many respects, the process of additional metabolic heat production can make situations worse in already hot conditions.

Research Design
The basic design of the study is quite sound:
• Ten highly trained subjects, with average age and VO2peak of 32 years and 70.7 mL/kg/min.

• Exercise bouts were in a chamber set at 34oC and 39% relative humidity, so a hot but relatively dry environment that still permitted some level of evaporative (sweating) heat loss.

• First exercise bout was a 5 min warmup, 15 min at a workload equivalent to 75% peak power output, followed immediately by a 15 min time trial. Subjects were given time cues but no other feedback, and were asked to complete as much work as possible in that 15 min. Therefore, the pace was self-selected. Importantly, a fan was used, although no details were provided of fan speed.

• Immediately after the first bout, subjects cooled down with 5 min at VO2peak, then performed the following 15 min recovery manipulations: 1) 1 min in 10oC water, 2 min out, repeated 5 times; 2) same with 15oC water; 3) same with 20oC water; 4) continuous 15 min immersion in 20oC water (all immersions were up to the neck); 5) active recovery of 40% VO2peak for 15 min in 31oC room. Subjects then passively rested by sitting back in the heat chamber for 40 min, totaling 60 min of recovery.

What Happened?
In keeping with the idea that the active recovery, while useful in cooler environments, might be detrimental in hot environments, the thermal strain was highest during both recovery and the second bout of exercise in the active recovery condition.
• In keeping with prior work on using CWI for recovery from hyperthermia, the colder the water, the greater the decrease in mean body temperature (a combination of core and skin temperature).

• Time trial performance was similar in all four CWI conditions during the second bout, and were essentially identical in total work performed to the first bout.

Summary
This study demonstrates again the importance of body temperature in influencing exercise performance, and the importance of keeping as cool as possible in hot environments. What was really nice about this study is that it disproves the notion that active exercise is always required for optimal recovery. Again, such advice can be valid in more temperate conditions, but it appears that body temperature trumps when exercise is in the heat.

The study was also nice in being comprehensive and testing multiple CWI temperatures and comparing continuous versus intermittent CWI. While differences existed in the temperature profiles, the similar performance results suggest that even relatively tepid temperatures of 20oC are sufficient to provide effective. This becomes extremely important information “in the field” when working with athletes or occupations such as firefighters, because this lessens the need and logistical problems involved with “super”-cooling.

Out on the road, the following advice would seem to be warranted based on this study:
• Where possible, get off the bike and out of the sun and heat as rapidly as possible. Some cool-down is fine, but don’t feel like you need to do an extended cool-down.

• If possible, take a 10-15 min cool shower during the recovery period.

• Stay hydrated during the recovery period.

Have fun and stay cool!