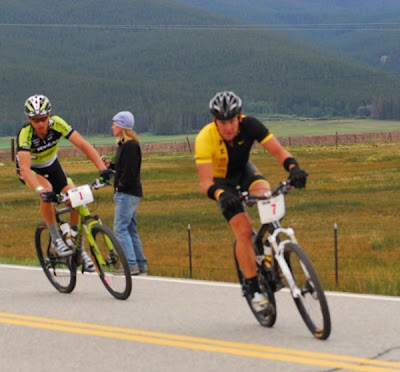 Dave Wiens pulled away from Lance Armstrong in the final ten miles of Saturday's Leadville Trail 100 in Colorado, winning the race for the sixth time, in record time.

Armstrong accelerated on the Columbine climb — which tops out at the halfway point of the out-and-back race — and broke up a group of ten that had formed in the first half of the race. Wiens matched his pace and in a few short miles the two had a five minute gap over third place, which grew to more than 20 minutes at the 80-mile mark and more than a half hour at the finish.

Despite the huge gap, the two rode together, trading pace like road riders on the smooth sections. Surprisingly, Armstrong was often the stronger rider on the descents, while Wiens, a two-time mountain bike world cup winner, was more conservative.

Wiens said the drafting contributed to the record time. Wiens won in 6:45:45, about 13 minutes faster than the record he set last year. Armstrong finished at 6:47:41.

Armstrong dropped behind Wiens on one of the last climbs, but then caught back on the descent. A few miles later he told Wiens that he was through.

"He said,'I'm done, go," Wiens said. Wiens briefly tried to encourage Armstrong to continue, but then accelerated slightly and pulled away. "It wasn't like he just stopped pedaling, though," Wiens said. "I'd look back and he'd still be there."

Armstrong said he simply didn't have the miles in his legs for such a long race.

"At the end I realized I was totally cooked ... I haven't done a 7-hour ride in four and half years."

Armstrong called the race "a blast," even though he finished with some scrapes after crashing in the final miles, after Wiens pulled away.

"I just overcooked it into a soft corner," he said.

Wiens had his own excitement in the final miles, when his rear tire went soft with less than a mile to go.

Manuel Prado of Lake Forest, California, was third about a half hour behind Armstrong.
Posted by Recovox at 4:05 PM