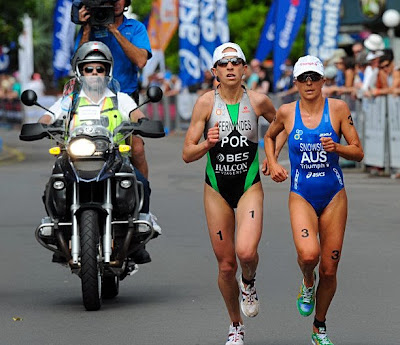 Today at the Jundu Tourist Villa, the official hotel for the triathlon at the Olympics, Vanessa Fernandes spoke to the media about her preparation and mindset for the Beijing Olympic Games.

For months Fernandes has been widely regarded as the gold medal favourite. She is still among the major players for a spot on the podium but she respects the other 54 women in the field.

“Every girl is talented. I think any of the 55 women can be in the top three,” said Fernandes. “I’m not stronger than them, I’m just another girl to compete with them. I know I worked for that. This is another test in my life, another part so and another experience and I will learn a lot with another Olympic Games.”

Fernandes also spoke about how her approach to these Games is different than Athens.

“Everything is different for these Olympics, really different. In my first Olympics I was young. In the race I went with the girls and see what I can do. But in the last four years I won some things and I put my name a little high in triathlon. The mentality is different and my goals are different and I’m growing up,” said Fernandes.

Despite her recent lacklustre performances which included a DNF in Hamburg and a 10th place at the world championships, she appeared confident and ready to race.

“I’m just going to be Vanessa on race day, just to do my best and take the pressure off my mind and to believe in me and believe in the work I have done in these last few years and last few months and to think that everything is possible,”

After failing to finish in Pontevedra because of the cold and finishing 10th in Vancouver also for the same reason, it was clear Fernandes does not enjoy racing in the cold. But that will hardly be a problem here in Beijing as athletes will have to battle the heat and humidity.

“The last few years here I felt good but I know the humidity and the weather will be a little difficult for everyone so I don’t know but I think I will feel good with this weather,” said Fernandes.

Much has been said of Fernandes not winning as much as the last few years. She admitted her last few races have perhaps shaken her confidence.

“I think maybe in the last months maybe a little but I think in the last few stages I have learned a lot with my coaches, only not training physically but psychologically it was very good for that. I think I’m prepared for Monday.”
Posted by Recovox at 8:27 AM