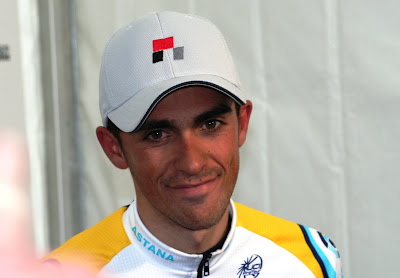 Alberto Contador got home from Beijing on Thursday with one thing on his mind. The Vuelta a España starts in two weeks, hot on the heels of the Olympic Games. Thanks to an initial test of form in Beijing, Contador knows that when the peloton leaves the gate in Granada, he'll be ready to win.

Did you like your experience at the Olympic Games?

Yes, it was very beautiful. Every athlete wants to be in the Olympics at least once in his life, because it's a privilege few can have. Being in the Olympic Village with the best athletes in the world is something that we want to be able to enjoy.

What conclusions have you drawn about finishing fourth in the time trial? Will you return in four years for the gold medal?

My conclusions are very good. I'm happy with the result, since my physical condition was not the best. I worked very hard and squeezed every ounce of potential from my body, although I was deflated at the end.

I can see that my preparation for the Vuelta a España is on target and that I've improved enormously in the time trial, which gives me peace of mind regarding the other climbers. I need to fine-tune my form, but I believe that I can arrive at the Vuelta in very good shape.

Will you want to go back to the next Olympic Games?

I would definitely like to return for a triumph, but that's very difficult to do. I believe that in a few more years I should've improved in the time trial and then I'd like to go back to fight for the gold, although I'm not obsessive about that goal. What I know is if I'd ridden the Tour and finished well, I would've gotten a much better result in Beijing.

A controversy has arisen over Levi Leipheimer's time trial bicycle. What do you think of that?

What I would never want is for them to take his medal away and give it to me, because Levi is a colleague and a friend.

Also, I don't believe there's any reason. They've already looked at his bike at other races and if there was something wrong with it, they wouldn't have allowed him to take the start in Beijing. I'm not concerned about it.

When you got back to Madrid, you got the good news that your new website is ready. What do you think about it, what do you expect from it?

I was eager to see it, because the previous one was beautiful and had lots of visitors, but it lacked updates.

Good work has been done and it has very interesting things. I'll write contributions myself when I'm in competition, and we'll have a lot of content.

The best thing I can say is that I hope lots of fans will visit and tell us what they think and how to continue improving it. It's not cool to be without a good website these days, plus I can be in closer contact with fans all over the world.

There are 15 days before the start of the Vuelta. What's your plan?

To get over jet lag and the effort of the race on these first 3 days so that I can start training again.

I also want to scout out the Sierra de Madrid stages, because the team will train at Navacerrada just before the start. Also, I'm going to ride the Clásica a los Puertos to get back into the rhythm of competition.

How do you see yourself before the start of the Vuelta?

Mainly I'm really excited and very motivated to ride to win, because unlike in the Giro or the Tour, here I know the parcours very well and I want to enjoy the Spanish fans.

All this is very important in the month of September, and since I didn't ride the Tour, I believe that I'll be very good physically.

Also, I'm lucky that in this team I'm not under pressure to win. I'll start the race with my duties clear, I'm still very young, plus Leipheimer will ride, and he's another guy that can fight for the general with confidence, plus Klöden will probably come, and his quality makes him another candidate.

The objective is that Astana wins, and we have three very solid tricks up our sleeve.

Will the road choose the leader?

Yes, the road will tell us the best strategy. Astana wants to win, and I'm lucky to have these two teammates with me, because we'll be able to defeat stronger rivals.

Do you believe all the program changes will affect you, as well as having done the Giro?

No, this year hasn't affected me. This year has been an exception, because I won't ride two big tours in the same season again, but I believe that I'm going to arrive fresh, especially mentally.

Will your debut in the Vuelta be lucky, like the Giro?

I don't know, but I'm sure that both knowing the race and my desire to enjoy my country and the Spanish fans will work in my favour.

What will be the key elements of the race?

I think that we have to wait until the end to know the winner, but the first test will be the first 40 km time trial, where some of the favorites might fail.

Then the Pyrenees stages will show proof of each rider's form. After this group of mountains, the big story will be the stages in Asturias - Angliru and Fuentes de Invierno.

Whoever leaves Asturias as leader will have won most of the Vuelta, which only leaves the last test in the Sierra de Madrid and the time trial to Navacerrada to settle things, if the differences are still small.

Is the Vuelta a España for climbers or time trial specialists?

For climbers, although it's not bad either for people who can do well in the TTs, then ride defensively in the mountains.
Posted by Recovox at 9:24 AM