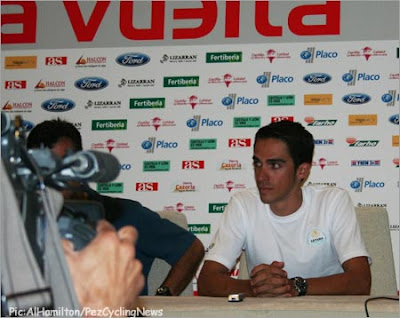 One day prior to the Vuelta d' España, Alberto Contador was at the disposal of the international press in Granada. Here are excerpts from the press conference.

Q - Alberto, everybody expects and hopes for a duel between Alberto Contador and Carlos Sastre. Is that your idea too?
A - That is difficult to say. The media say so. It makes a good race if there is a fight between two riders. It means spectacle and many press articles,
but for the riders that is not so good, because a third rider can take advantage of the situation. You should not forget about Alejandro Valverde. In the
last Tour de France, he had only one bad day (on the Tourmalet). He has finished second as well in the Vuelta.

Q - Are you more motivated because you can race against the winner of the Tour the France?
A - No, I am not. My biggest motivation here is to ride the Tour of my country. I will enjoy it and will love the encouragements and warmth of the fans. For
me, Carlos Sastre is just a rider like all the others.

Q - Carlos Sastre says that it will be easier for you as you did not do a hard Tour de France.
A - OhŠ everybody is looking for excuses or quotes to put the pressure at the other riders. I am used to that tactic but I apply that technique as
well. Every rider does.

Q - Before the Giro you were not prepared. Now you are. That means that the Vuelta will be easy for you?
A - That is theory, of course. I had indeed a super preparation for this race, but there can always be someone who will be stronger. It is difficult to
predict such things. Cycling is still not mathematics.

Q - You are the leader of the team?
A - Yes, I am, but it feels comfortable for me that I have in Levi Leipheimer and Andreas Klöden two guys who can take over when necessary. It gives me a
bit more peace and rest before the race.

Q - What do you think of the Angliru?
A - It is nice. It is hard as well. It will be a nice stage. Many people or riders say that it is too hard, but I don1t agree with that. It is good for
the spectacle. The public will be wild. Of course the organizers shouldn't do that every day, and they don't. So what's the problem? I talked about the
Angliru with Alejandro Valverde. When he did the recognition, it was very difficult with the small stones (gravel) on the road, but when I
checked the climb in July, everything looked good. It was steep of course.

Q - Did you see in advance every stage?
A- No, not at all. I have no idea what the TTT tomorrow will bring. It is short, I saw, and dangerous. I think that the team that takes the most
risks not us will win. I only checked the Pyrenees and Asturias stages in July. Plus last week I went to see the circuit or the TT in Ciudad Real.
It is difficult to say which stage will be the decisive stage. Probably Ciudad Real will be the first test. The Pyrenees and Asturias will be
decisive, but which stage? No idea.

Q - When you will win the Vuelta, you will be only the fifth rider to win Tour, Giro and Vuelta. Does that give a special feeling?
A - Honestly? No. It certainly will be important, but it is so far away for me. Once in my career I hope to win the Tour of Spain, but if it only happens
the year of my retirement, then it is okay for me as well. I am only 25 years old. I still have time enough.

Q - After the Vuelta, there are the world championships in Varese. You are not on the list of Spain's coach Paco Antequera. Why?
A - That is a mistake. I already talked about it with Antequera. If my condition is good when I finish the Tour of Spain, I'll go to Varese. If
necessary I can work for Valverde or Oscar Freire. No problem. The circuit suits them better. The time trial can be more something for me, like in the Olympic
Games. I enjoyed being in Beijing. My condition was not super yet but that was fortunate, otherwise my Vuelta would not be good. But it was so nice to
be there with all best sports men of the world.
Posted by Recovox at 4:25 PM