Catching Up With Crowie 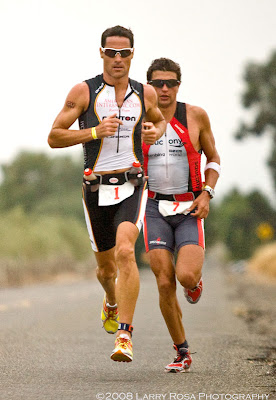 Australian Craig Alexander has become one of the best-known names in multisport over the past decade. Adam Palmer caught up with the multi-distance star to ask about family, foes, favorite races and that dream of a Kona title.

Will you competing at Ironman Hawaii this year?
Yes, I’m racing again in Kona

Do you prefer Olympic-distance or Ironman events?
I like to be versatile and race all distances. Each distance has its own attractions. Short-course racing highlights speed, while longer distances highlight mental toughness and preparation.

Which would be more important to you: Olympic gold or the Ironman world championship?
Both are great achievements, but I am racing in Hawaii, so that is my main goal and most important to me.

What is your favorite event and where?
Ironman Hawaii on the Big Island and St. Croix Ironman 70.3 in the U.S. Virgin Islands

Who has been your idol and mentor in the sport? Who’s is the best athlete you’ve competed against? Who’s the toughest?
Greg Welch was always an athlete I looked up to because of his consistency and versatility. More recently, the best athletes I have competed against are Simon Lessing and Craig Walton. As for the toughest, there are plenty of tough guys on the circuit, but the one who comes to mind is Bevan Docherty.

What is the proudest moment of your life?
Getting married to Neri and the day Lucy was born.

How important is it that wife Neri and daughter Lucy travel with you for seven months a year? Keeping this in mind, how many more years on the circuit do you think you have?
Family is the most important thing to me, and I wouldn’t want to travel away unless they came with me. We’ll continue to travel and race until Lucy goes to school.

What got you into triathlon and what other sports did you excel in?
I started running to lose weight after a hernia operation and too much beer at university while studying for a degree in physiotherapy. Like all kids, I played a lot of sports, including golf and tennis, but my main sport was soccer, which I played for 12 years in youth league and for teams Apia and Sydney Olympic.

How many hours a week do you train? What does your training consist of for each discipline?
It varies depending on what time of year it is. Obviously in the base phase there is more hours, up to 35, but as you get closer to an event, there is less volume and more intensity. It’s hard to put an exact figure on how much, but each discipline requires working on your strength, endurance and speed.

How important is diet and nutrition in your training schedule?
Extremely. Drink as much chocolate milk as you can!!!

What do you do to speed up recovery after races?
Ice baths, rest and massage.

Have you suffered any serious injuries?
I had the chicken pox in 2002, couldn’t train for 10 weeks and therefore missed the qualifiers for the Commonwealth Games. I had CMV (cytomegalovirus) at the end of 2005.

How do you spend your off-season?
Visting family at Coffs Harbour and friends who we don’t see while we’re away. A little golf and some Daddy Day Care while Neri goes to work.

One of your long-time rivals is Richie Cunningham. Is he ever likely to beat you in a major race?
Richie is a great athlete and very consistent. He has won a medal at the [70.3] world championship and I’m sure he’s trying to beat me every time we race.

After winning the Australian long-course five times, St. Croix [four] times, finishing second in Hawaii, winning the world championship 70.3 in 2006 and winning several titles in a stellar 2007 season, what else is there to achieve in the sport? How do you keep focuses on your goals?
I set myself new goals each season that are always challenging and keep me motivated.

What do you plan to do in retirement?
Coach juniors, continue studying for my degree in physiotherapy.

How did you get the nickname Crowie, anyway?
I got in 1997 while watching the Uncle Toby’s Surf Ironman at a training camp. Chris Hill thought I looked like Jonathan Crowe.
Posted by Recovox at 11:54 AM