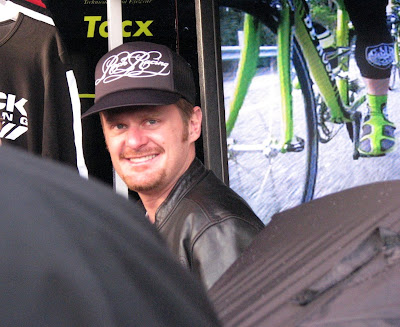 Tyler Hamilton has welcomed Floyd Landis to join his American Rock Racing squad, once his ban from competition ends next year. The American tested positive for testosterone after the Tour de France in 2006.

"Floyd is welcome to join us immediately," 37 year-old Hamilton said, according to Belgian publication HLN. "I know what he is going through, we can help him return to the top."

Landis is suspended until January 30, 2009 after having his Tour de France title stripped from him following a drawn-out legal battle.

Hamilton was also suspended for two years for a positive EPO test. He made a turbulent re entry into the professional peloton at the beginning of the 2007 season with Tinkov, before moving to the Rock Racing team in 2008. Last month Hamilton claimed his first stage race victory since returning to the sport at China's Tour of Qinghai Lake.
Posted by Recovox at 9:14 PM

Fair is fair. After Landis finishes his suspension he should be allowed to race.