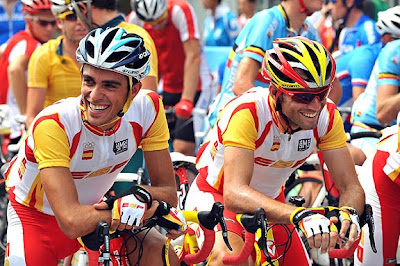 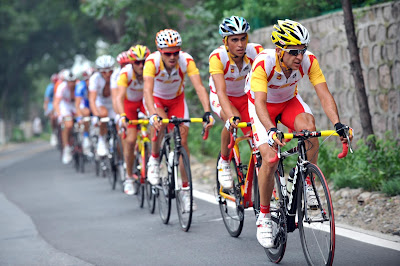 "I can't quite believe I've won the gold medal," said Sanchez, a 30-year-old from Oviedo whose biggest wins to date have been his five stage victories on the Tour of Spain. "My biggest fear was whether we'd be able to control the race as a team, and in such humid, and tremendous heat. But we raced to perfection." 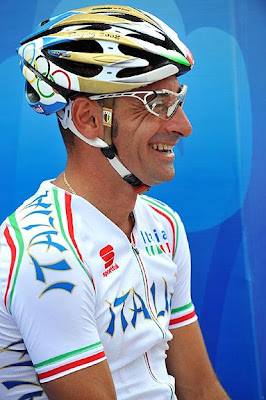 A race of attrition
A thrilling end to the first big endurance test of the Games bore witness to a tough race of attrition that proved too much for some of the 143 starters, 53 of whom dropped out during the seven laps of a hilly 23.8km circuit.

And in the end, it left Sanchez to upstage his team leader Alejandro Valverde, and two of Italy's big hopes.

Reigning champion Paolo Bettini of Italy was left trailing with Valverde after an attack on the final climb instigated by Australian Cadel Evans. It was a move that led to others, and ultimately led to a six-man tussle on the final 250 metres after a tough 6hr 23min of racing in 26 degrees celsius and 90 percent humidity. After Evans' move, the leaders slowly got whittled down as the tough racing conditions continued taking their toll.

Bettini admitted it was where his Olympic title hopes were dashed.

"I knew on the last lap that my chance had gone," said the Italian, the two-time reigning world champion. "I got stuck behind watching Valverde. I'm disappointed, but I can't complain. The race was very tough."

Another attack, this time from Luxembourg's Andy Schleck, split the leaders again, allowing Rebellin, Australian Michael Rogers, Russian Alexander Kolobnev and Sanchez to break free. Schleck put in another fierce turn of pace on the climb with around 14km to race, leaving the 23-year-old Luxembourger with Rebellin and Sanchez on his wheel.

It initially proved too much for Rogers, who was left struggling to follow with Kolobnev, the Russian gasping for air. But on the long flat section leading to the uphill finish line the pair did well to close the gap.

Their chances of a medal were doomed, however, when Cancellara, who had jumped out of Evans' group to produced a huge effort worthy of his three world time trial crowns, closed the gap to the pair. Together, they caught the leading trio with barely a kilometre to race.

Cancellara, racing alone due to a training ride crash of his sole teammate Michael Albasini, admitted he'd had to come up with a special tactic.

"I told my small team before the race to follow the big countries!" quipped the Swiss. "I had no choice, I just had to try and follow. I took a risk at the end by attacking at the end, and it turned out to be the good choice. Otherwise I wouldn't have the bronze medal." 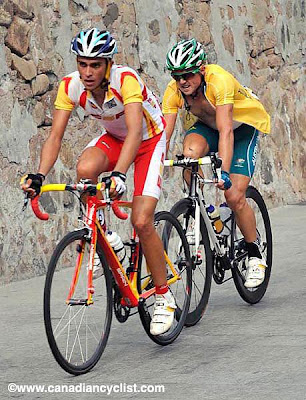 On the final 250 metres Sanchez stunned Rebellin with a move up the right hand side which allowed the Spaniard to cross himself - after a hellish day in the saddle - just as he came over the finish line.

Rebellin was gutted, but admitted: "Today the strongest rider was Samuel. But I've got the silver medal, and that's like a prize in itself."

Rogers finished sixth, but was upbeat despite the oppressive conditions.

"I'm disappointed but still happy to have been there in the end," said the Australian, who has only returned to competition recently after suffering glandular fever. "It was a good performance, I just cramped in my hamstring in the last 200 metres, so what can you do?"
Posted by Recovox at 2:54 PM