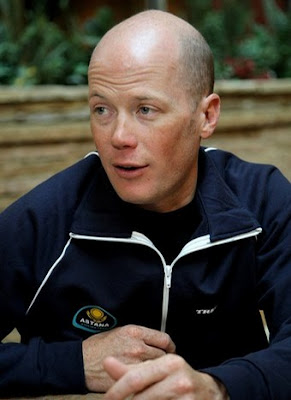 Chris Horner believes he should be gearing up to ride in support of Levi Leipheimer in Saturday’s Olympic road race, not sitting at home with a broken collarbone.

Speaking from his home in Bend, Oregon, the 36-year-old Astana rider lambasted USA Cycling for not selecting him as part of its five-man team for Beijing.

“The guys who selected the Olympic riders — at least the ones who left me off the list — are idiots,” said Horner, who suffered the broken bone in last week’s Tour of Elk Grove, a month after USA Cycling announced its team for Beijing. “The decision either comes down to politics, brownnosing, they just don’t like me or they are idiots. It must be politics, because nobody is that stupid.”

But Horner says he, not McCartney, should be on the team.

“How the USA Cycling selection committee could have chosen Jason McCartney to race in Beijing over me makes absolutely no sense,” Horner said. “There are only a few guys in America capable of staying with the best in the world, and I’ve never seen Jason riding the wheel of riders like [Spain’s Olympic favorite Alejandro] Valverde.

“The only argument that could be made in Jason’s favor over mine is that Jason is a rider who can ride the front. Well, I have ridden for the best guys in the world — Cadel Evans, Alberto Contador, Levi Leipheimer. I’ve never in my career jeopardized the team to ride for myself. And I’ve ridden against those guys, too, sitting on their wheel — and that’s not something Jason has done.”

Horner has never been selected to an Olympic squad. He was left off the U.S. team in 1996 despite being the top-ranked rider in the country. In 2000 and 2004 USA Cycling used automatic and discretionary criteria in addition to Olympic qualifying events, won in 2000 by Antonio Cruz and in 2004 by McCartney.

After the 2004 event, Horner derided U.S. Postal Service’s Zabriskie and Cruz for negative racing, saying McCartney was “the weakest rider in the group” because he had been cramping and was only able to regain contact with the bunch because of negative racing. McCartney rode for Health Net-Maxxis then, but was already on his way to the U.S. Postal Service squad, which became Discovery Channel in 2005.

“Never did I say Jason was a bad rider or not worthy of his trip to Athens,” Horner wrote in a VeloNews rider diary in 2005. “Jason's desire to push past the limit was very impressive. In bike racing sometimes timing is more important than strength. It was just that, on that day, he did not have the best form of the riders in the break. I did, however, say that U.S. Postal rode the worst tactics that I have ever seen from a team of that quality, and I still believe that to be true.”

This time around, Horner was again quick to point out that his problem is not with McCartney, whom he described as “a great guy and one of the top-10 best riders in the U.S.”

“Jason is also one of the best opportunist riders out there,” Horner said. “But the Olympic team isn’t for the top-10 best American riders, it’s for the top-five best riders, and it isn’t a race for opportunists, it’s a race where the best riders in the world battle it out at the finish.”

Ochowicz, who is in Beijing, said making the discretionary picks was a challenge. One factor in their decision was the injuries Horner suffered at Spain’s May 19-25 Volta a Catalunya. Horner suffered a cracked rib in a crash, and the injury kept him from finishing June’s Dauphiné Libéré stage race.

“There were a lot of names on our list, and when we started getting down to the finals we had a big issue with Chris was that he had a medical problem,” Ochowicz said. “We were picking the team right then on top of those dates, and that was a factor as much as anything else.”

Horner and McCartney “are similar riders,” Ochowicz continued. “They’re both good climbers and team workers, but McCartney was healthier at the time and Chris was injured. We got as much information we could from as many people about that. We weren’t just guessing.”

Horner disputes that claim, saying no one from USA Cycling ever called to ask about his recovery. He says the only phone call he got was from Leipheimer, saying he hoped Horner would be chosen.

Zabriskie was also nursing an injury at the time of team selection. The Garmin-Chipotle rider fractured a vertebra at the Giro d’Italia and May and was forced to skip the Tour de France.

Leipheimer, who will headline the United States’ squad in Saturday’s road race, said he believes Horner has the skills and strength to be racing in Beijing.

“I think Chris deserves to be here. He is a super-smart bike racer and has a ton of experience. He would be an asset to the team,” Leipheimer said. “He deserves to be here, but so does everybody else. We only have five spots.”
Posted by Recovox at 12:06 PM