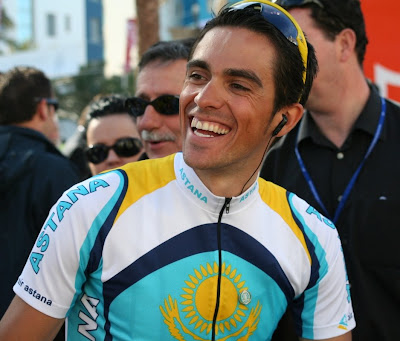 With both the French and Italian Grand Tour titles to his name Alberto Contador is focused on claiming his home Grand Tour when it starts later this week, according to the Astana rider. Contador is ready to battle at the Vuelta a España, having added the Giro d'Italia win in May to his Tour de France victory from last season.

"I have been focused on this race for a number of months," said Contador. "I've spent time with the rest of the team and I feel that we are prepared and motivated for the next three weeks. I am better prepared than I was for the Tour of Italy. Mentally, but technically as well. Right now we're not looking too far ahead, but our goal is to win another Grand Tour for Kazakhstan."

Contador will have the support of big names Andreas Klöden and Levi Leipheimer in Astana's roster for the Spanish event. The team is expected to enter the race as favourites to win, having been so strong in Italy despite only being invited one week earlier, and being hungry to prove the squad's strength after not being selected to defend the Tour de France title in July.

"Since early in the season, we identified the Tour of Spain as a major team goal," said Johan Bruyneel. "We've had an excellent season to date and our riders are extremely motivated to end in winning fashion. I think we've assembled a well-balanced team that can accomplish our final major goal of 2008. We have riders for the mountains and flat stages, as well as the experience of super champions like Alberto Contador, Andreas Klöden and Levi Leipheimer."

The Vuelta will also see one of the team's riders farewell his home Grand Tour, with 34 year-old José Luis "Chechu" Rubiera to retire at season's end. The rider is hoping to play a roll in a successful final Grand Tour outing. "This will be my 20th and last Grand Tour," he said. "I am very grateful to all the riders, staff, sports directors and fans who have supported me throughout my entire career. It is a true honour to have had the opportunity to race for Johan, Lance and now Alberto. It has been a dream and I would love to complete my career with another Grand Tour victory."

Astana has selected an experienced team in the hope of guiding Contador to home soil glory, according to sport director Alain Gallopin. "It was not an easy choice, which really shows the strength of our team," said Gallopin. "We have a lot of talented riders on Team Astana, but Johan and I decided that certain intangibles, such as experience, were very important. This group knows what it takes to win the big races and I'm hopeful we can prove this in the next three weeks."