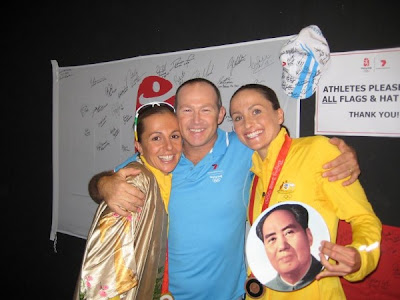 Snowsill stuck like glue to Vanessa Fernandes on the bike and covered every attack. The Aussie elected to not race Worlds this year in Vancouver, and it has now been proven that training in a warmer, more-humid climate worked. Based on the Gold Coast under direction of coach and fiance Craig Walton, Snowsill trained solo and worked in her own safe environment.

The run was always going to win the race for the dimunitive Aussie, and she made her break with a ridiculously fast transition. The pace was fast as Snowsill took it out hard - not even Fernandes, a 20-time World Cup winner could hold Snowsill's pace settling into the chase pack. Snowy was running faster per kilometer than any athlete on the course .

A drink truck made its way onto the course in the third lap, forcing Emma to jump the barriers. Mate, at this stage I reckon she could have competed in the steeplechase, too! Snowy went on to win by a lengthy margin claiming Australia's first gold medal in triathlon.

The men's race was a little different, with most of the athletes emerging from the water together.
I was surprised to see Olivier Marceau of Switzerland and Brit Tim Don behind, though. The main group formed on the bike and it was on from the go.

The group was easing into this race and that allowed two chase groups to catch back up. By the end of the third bike loop of six, the field became 51 athletes.

The men's race was a procession until a group of three exited and went up the road. One of those athletes was XTERRA's Francisco Serrano of Mexico, who was unable to hold the cracking pace, blew up and fell into in no man's land.

Luxembourg and Belgium had one athlete each off the bike first and ran out with 10,000 screaming spectators on their feet. The mad rush was next to arrive into transition and I swear it was like there was a red light sale at a flea market as they fought for position heading in.

Alistair Brownlee was the early pacesetter and it looked as though this 20-year-old had been racing for years as he set a solid pace over the first kilometers. The favourites were all sitting nicely until Ivan Rana, the former Spanish world champ, made a move on the ascent into the stadium. Javier Gomez, this year's world champion, went with his compatriot amigo, but it proved to be a costly move in the end.

The final kilometer was the most exciting kilometer I have witnessed in ITU Olympic-distance racing, as all the favourites were there: Gomez, Docherty from New Zealand and Simon Whitfleid, the Sydney gold medalist.

The one guy I didn't really know too much about just so happened to be the new Olympic champ. Jan Frodeno form Germany was just sitting in nicely throughout the run. I didnt expect him the hang with the terrific trio. Whitfield started to fade with 800 meters to go and had slipped off the back. With 500 meters to go, the leaders were sorting each other out and allowed the Canadian to catch up. Whitfield was first to sprint, leaving Gomez in a hole - not what I expected. Then it was Docherty who couldn't manage the pace.

Frodeno, the lanky German, was struggling to stay with Whitfield until he gave it a last-ditch effort and it worked, catching Whitfield with 75 meters to run. Whitfield was shot, he had nothing left, triathlon's first Olympic men's champ was now going for a mixed bag. In saying that, I challenge Simon to hang around and maybe get the bronze in London!

Triathlon was the real winner, however. In my opinion, the venue at Chanping was phenomenal. You have to be here to understand what really went into this to make it a success.

OK, I am catching up with some athletes today and will give you all the juicy goss next time.