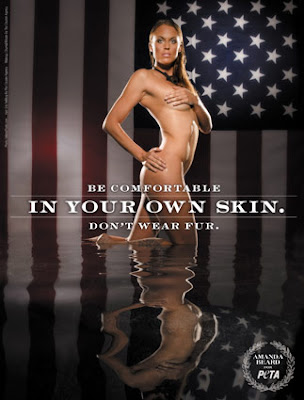 In a poster for the animal rights group PETA, the reigning 200-meter breaststroke champion appears naked in front of the U.S. flag and the slogan "Be comfortable in your own skin. Don't wear fur."

Jason Baker, an Asia-Pacific spokesman for People for the Ethical Treatment of Animals, said the launch was "a bit more dramatic than we had planned" after Chinese security officials visited a hotel where an official news conference had been scheduled and shut down the event.

"From what I've been told from the hotel, the public security bureau showed up at midnight and told them our specific event had to be canceled for safety reasons, without going into any specifics," Baker said. "When I arrived at 8 a.m., there were public security officials in the press conference room we had booked.

"Amanda didn't want her voice to be silenced, so we went ahead and arranged something else -- we never knew if we were going to be stopped at any point."

"It was a sexy ad really designed for the U.S. market. It was positive, and it was (supposed) to be done in a private function room," Baker said. "I'm surprised they were so concerned, given we've done similar with Asian celebrities in the past."

The 26-year-old Beard, who has posed nude in men's magazines, said she decided to participate in the PETA campaign because she loved animals and was horrified to see how fur was produced for fashion in some places.

"I have seen a lot of the videos, and (it) brings me to tears," the four-time Olympian was quoted saying in a PETA statement. "What (some people) think is pretty is actually something that's very gruesome and gross
Posted by Recovox at 7:39 PM