Contador Takes 4th - Next Up Vuelta a España 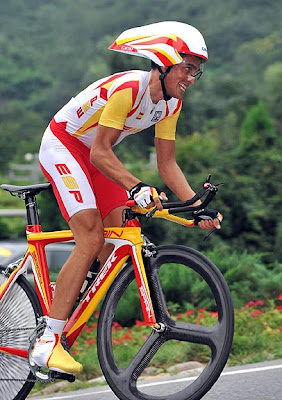 Alberto Contador sprang out of the start house ready to pounce today in the men's Olympic time trial.

Everything looked beautiful--the suplesse, the cadence, the grace, the concentration.

He fired through the course, setting the best time at the first two check points. But things changed in the second lap. A look at his face as he passed the third check revealed that all was not well.

At the finish line, Alberto looked destroyed. He finished fourth. 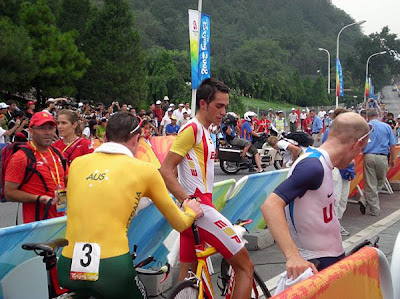 Disappointed, he said after the race, "It's hard not getting a medal. Everyone in Spain expected it of me."

“The time trial is not my forte, but every day I work on it. I could feel Spain and the people of Pinto in front of a giant screen in the plaza. I felt their support. I hope to win a medal in the future."

“Stef Clement disoriented me because first I passed him, later he came back and passed me, then I passed him again, and that breaks your rhythm.

“Also Larsson surprised me, although any rider who comes here can fight for a medal. Here they’re the best time trialists in the world and give a hundred percent.

“My best chances were on the ascent, since the route was for people with a lot of power. But I’m content.” 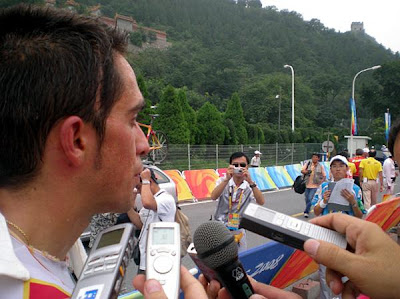 Fourth place in an Olympic event is an honor--a career high point--and it was thrilling to see him race in China. For Alberto Contador, however, the day's result is no more than a tick on his palmarés, and an expensive one, at that.

An excellent showing at the Olympic Games is history now, and thoughts turn to the rapidly approaching Vuelta a España.
Posted by Recovox at 9:46 AM