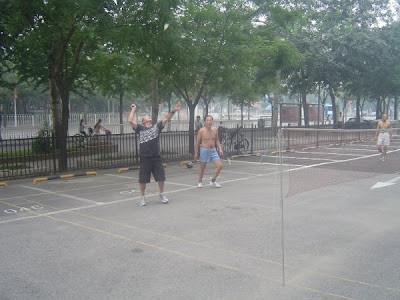 OK, I slept a little better than I did my first night. I have quickly settled into a nice early-morning habit of getting out and getting amongst it. It seems that most of the Chinese get out and do something in the morning whether it’s walking the dog and grabbing a half hour doing Tai chi!

I walked in Chaoyang Park again and today I found some trails. I also found some fellow westerners jogging in the early fog!

I found it to be incredibly humid today and it was evident it was going to rain. Being from San Diego, any shower is welcome to me and today I was waiting for a drenching to cool me down. It did rain, for 30 seconds. The drops were massive and I thought I was going to get a royal drenching, but it wasn’t to be.

I continued my walk toward Workers stadium, a soccer venue, and noticed a group of shirtless elderly men playing badminton on a makeshift court in a parking lot.

I also noticed that there were three men: My chance to get in a badminton instead of a walk.

I approached the men and asked if it would be OK to play. They obliged and reached into their bag and drew a spare racquet. Now, it’s been a while since I’ve played anything with a bat, racquet or anything that requires my heart rate reaching 100. But I had the best time, played for 45 minutes and had three terrific and hard-fought sets. Mate, these guys were all over 65 years old! 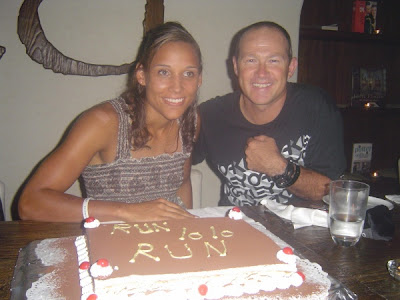 Last night was epic. I hosted a party for Oakley at its safehouse and the evening was a celebration for Lolo Jones, the current world indoor 100-meter hurdles champ. She won the trials early July and is dominating the world of hurdles.

We had a wonderful dinner with dishes ranging from squash-wrapped goat cheese to filet mignon and garlic shrimp, finished off with a tiramisu birthday cake. The food here is sensational, so don’t worry about what you hear, the horse’s mouth speaks volumes for the med restaurant in Block 8.

I am taking a tour of the village tomorrow and will endeavour to capture scenes of the nervous energy of Olympic eve. I will also try and talk to some triathletes, but I am hearing that most of the teams are coming in for opening ceremonies then leaving to neighboring islands and countries.