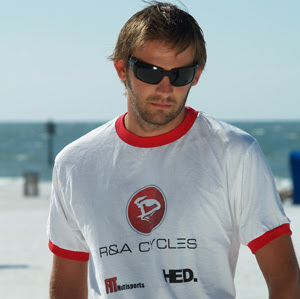 Now that the 2008 triathlon season is going into the last part I can look back on a few ups and downs so far. Unfortunately for me I started out the year with a bad race at Oceanside in late March before getting in a decent one at Wildflower later in the spring and then following up with a close 2nd at Austria 70.3 at the end of May. The main goal for the first part of the season was Ironman Lake Placid in July though where I was hoping to finally have a good race over that distance again. Leading up to it I started getting in pretty good shape, training through a decent Swedish national cycling championships weekend before tapering and flying over to the states.

Race day proved to offer perfect conditions for me with pouring rain and cool temperatures but unfortunately it wasn’t my day and I could never use the weather to my advantage. I felt sluggish in the water and dropped off the feet of the 1st swimmer about one third into the swim to exit in 4th place. On the bike the plan was to be very conservative which I managed pretty well though still catching up to the leader relatively quickly. But despite riding well within myself I managed to blow up on the bike with 60km to go. This rarely happens to me on the bike no matter the pace so I was a bit surprised but soldiered on to T2. The run isn’t much to talk about as I lost some time in the beginning before I got going again holding what I thought was a relatively safe 2nd place through 30km. Unfortunately my legs suddenly stopped cooperating at that point and I was reduced to finishing the race walking.

Anyway, I’m now looking forward to the rest of the season instead and hopefully some solid results. One of the races I’m doing is called Savageman and together with them and a few of my sponsors I’m putting on a small contest for charity with great prizes like a pair of Hed Stinger wheels and a generous package with K-Swiss gear.

The contest to guess Bjorn's bike split at SavageMan is here: http://www.savagemantri.org/Bjorn.html
Posted by Recovox at 9:59 PM

The contest to guess Bjorn's bike split at SavageMan is here: http://www.savagemantri.org/Bjorn.html

Thanks to Bjorn and his sponsors for endorsing this contest to which all funds benefit the Joanna Nicolay Melanoma Foundation!