The hardest Olympics ever? 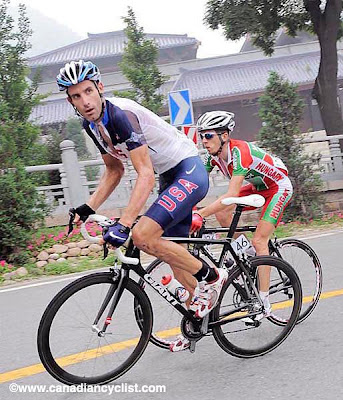 George Hincapie is one cool character, but before starting his fifth Olympic Games on Saturday in Beijing, the veteran American broke into a sweat ahead of what’s being hailed as the hardest Olympic race ever.

Why? Torrid is one word to describe conditions for what was, at 245km, the longest road race in Olympic Games history. Some were quickly calling it the most demanding as well.

“It was the hardest Olympics I’ve ever ridden. It was a race of attrition,” said Hincapie, who made his Olympic debut in 1992. “I can count on the back of my hand how many races I’ve started to sweat before the race started.”

Temperatures nudged only into the mid 80s, but humidity was at a sopping 94 percent and the air was heavy with the urban detritus of Beijing’s 14 million inhabitants.

Hardly ideal conditions for one of cycling’s most important one-day races.

“It feels like you have a hot cream all over your body,” Haedo said. “Once you go full gas, you cannot breathe.”

A grey sludge hung over Beijing. Rumors were flying that someone – whether it was NBC television or Olympic officials, no one seemed to know – wanted to delay the start of the race because visibility was severely reduced.

While TV brass might have been worried about the fogged out panorama money shots along the Great Wall at the finish line, riders were forced to ride through severe conditions in a grueling six-hour race.

“It was like riding at 3,000 meter elevation. You couldn’t breath,” said pre-race favorite Stefan Schumacher, who abandoned. “I have a pounding headache now.”

Alberto Contador, 2007 winner of the Tour de France, was a shadow of his typically dominant style as he wilted under the extreme conditions and pulled out with three laps to go.

Karsten Kroon fancied himself as an outsider for gold, but he abandoned with four laps to go on the 23.8km finish circuit.

“I am a wreck,” the Dutchman said. “I fooled myself in thinking I could win here. The humidity and the heat were too much for me. My head is about to explode.”

Incredibly, 90 riders did manage to finish.

Among those in the hunt for a medal were Christian Vande Velde and Levi Leipheimer, who both rode wonderfully to finish within shot of the podium in the hotly contested final lap.

When Leipheimer came through the final bend, visibility wasn’t so bad that he couldn’t see what was happening up the road.

“I came around that last corner and I could see the gold medal race just 300 meters up the road,” he said. “It was so close, yet so far.”

That sums up the feeling of just about everyone Saturday except Samuel Sanchez, Davide Rebellin and Fabian Cancellara. For those three, haze, heat and humidity were just fine.
Posted by Recovox at 4:15 PM