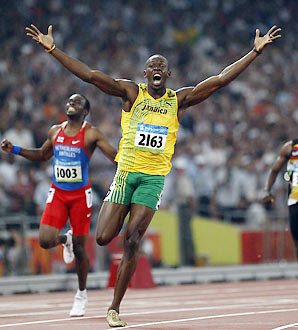 The Jamaican wunderkind hurtled to his second world record and his second Olympic gold medal, finishing the 200-meter race Wednesday night in 19.30 seconds to break Michael Johnson's 12-year-old mark.
Bolt became the first man to break the world record in both the 100 and 200 at the same Olympics. Not since Carl Lewis in 1984 has any man doubled in the Olympic 100 and 200.

He had this one won about halfway through, but unlike his record-setting performance in the 100 four nights before, there was no hot-dogging, no celebrating until he crossed the line. He went hard all the way, looking at the clock down the stretch, leaning at the line, knowing that Johnson's venerable mark was within reach.

When he saw the number come up -- a number that never has before -- he raised his arms, then fell flat to his back, arms and legs outstreched, and basked in the roar of the Bird's Nest crowd.

It is no understatement to call him not just "The World's Fastest Man," but maybe the greatest sprinter of all time.
He will also compare well to Jesse Owens, one of the eight other men to pull off the double at the Olympics.
Wallace Spearmon of the United States finished third but was disqualified for leaving his lane, a decision that U.S. officials protested. He was celebrating along with Bolt -- even picking up his friend -- carrying the American flag around the track for several minutes after the race and was shocked when an official told him of the DQ.

That gave Churandy Martina of Netherlands Antilles the silver medal and Shawn Crawford of the U.S., the defending Olympic champion, the bronze.

Indeed, they were racing for second. Martina finished in 19.82, incredibly more than a half-second behind Bolt.
Bolt is simply a different kind of runner -- coiled power in his 6-foot-5 frame, supposedly too big for success in the 100, but certainly built to run the 200.

His move out of the starting block isn't nearly as important in the longer race, which makes this more about raw speed. But a good start certainly doesn't hurt. He got one in this race, bursting out of the blocks from Lane 5, overcoming the lag about a quarter of the way through, then beating Martina to the line by four body lenghts.

Bolt's 100 record is 9.69 seconds. He averaged 9.65 per 100 meters in the longer sprint, running into a very slight headwind.
"Incredible," Johnson, now the former record-holder, said after the race. "He got an incredible start. Guys of 6-5 should not be able to start like that. It's that long, massive stride. He's eating up so much more track than others. He came in focused, knowing he would likely win the gold and he's got the record."

Bolt won the race on the eve of his 22nd birthday and a version of "Happy Birthday" played over the public-address system as he took off his gold shoes and wrapped the Jamaican flag around his shoulders like a scarf.

He did another hip-swiveling dance, then raised his hands and pointed toward the scoreboard. A little later, he posed near the scoreboard -- the traditional picture that all world record-setters take. Bolt now has three of them -- this, the 100 from Saturday and the picture he took in New York in May when he broke the 100 record the first time.

"You're back there giving it everything you've got -- it's brutal," said Kim Collins, the 2003 world champ who finished seventh. "He's doing it and making it look so simple. Michael Johnson did it, and it didn't looked that easy."

Bolt's victory made Jamaica 3-for-3 in the Olympic sprints, and the women's 200 Thursday will include three Jamaicans with gold-medal potential -- Veronica Campbell-Brown, Sherone Simpson and Kerron Stewart.

None of them, however, will surpass what Bolt has done at these games. And while Michael Phelps and his eight swimming golds may be The Story of these Olympics, Bolt's sheer dominance in the most basic tests of speed there are will not soon be surpassed -- unless he does it himself.
Posted by Recovox at 9:41 AM