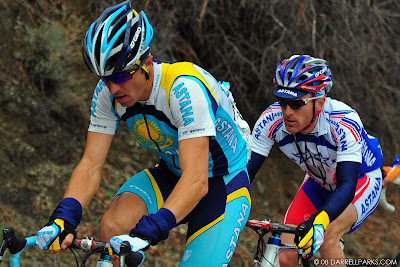 Showing that the squad is rested and ready to take on the Vuelta a España, the Astana squad took first and second in the Spanish 1.1 race, the Clásica Internacional a los Puertos in Guadarrama, outside Madrid. Leipheimer soloed to the win after attacking 20 kilometers from the finish, and came in 41 seconds ahead of Contador.

"This is a very special victory for me", commented the winner. "Today I raced for the last time in my USA national champion kit. It's been a honor to wear the stars and stripes and win a medal for my home country, but this year I've decided to focus on the Tour of Spain, which has been a major Team goal since early in the season."

Leipheimer was part of the early breakaway of the race. On the Puerto de Navacerrada, a first category climb, Contador escaped from the chasing peloton to join the leaders; five of who went to the finish in Guadarrama. Contador tried to escape, and when his effort was unsuccessful, Leipheimer used the same power which took him to a bronze medal in the Olympic time trial to solo to his sixth victory of the season. Contador finished behind Leipheimer in 2nd place. Contador was pleased with his performance. "It was nice for me to race on my training circuit in the madrilene sierra. I'm feeling good and am very happy to see that my teammates are in good condition as well. We are excited to start the last Grand Tour of the season on Saturday."