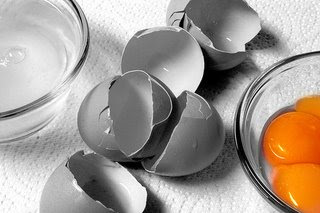 Stop the presses: A new study published online in the International Journal of Obesity suggests that eating two eggs for breakfast (and not just the whites!) is healthier than eating a bagel.

As avid Mark’s Daily Apple readers, this one is easy to chalk up as a “well…duh” type of study, but the researchers note that the importance of the study is that it lends further support to the importance of high-quality protein in the diet. In fact, a special issue published in May in the American Journal of Clinical Nutrition finds that not getting enough protein may increase your risk for obesity, muscle deterioration and chronic disease.

But back to the eggs. For the study, researchers from the Pennington Biomedical Research Center at Louisiana State University assigned 152 otherwise healthy but overweight or obese participants to one of four groups: Egg, which required them to eat a breakfast containing two eggs; bagel, which required them to eat a breakfast containing bagels that was identical in terms of energy density and total energy to the egg breakfast; egg diet, which allowed the egg breakfast as part of a 1000 kcal energy-deficit low-fat diet; and bagel diet, which allowed the bagel breakfast plan, but this time with the calorie restrictions. Study participants were required to follow these diet parameters for at least five days per week

After eight weeks, participants in the egg diet group exhibited a 61% greater reduction in body mass index (BMI) than their peers in the bagel diet group. But we all know BMI is a bit of a tricky measurement and isn’t necessarily reflective of a healthy weight, so consider this: When compared to the bagel dieters, participants in the egg diet group also exhibited a 65% greater weight loss, a 34% greater reduction in waist circumference (which some experts would argue is far more indicative of future health risks) and a 16% reduction in body fat (now we’re talking!). However, the researchers note that the weight loss-enhancing benefits of eggs only appear to work when they are eaten as part of a calorie-restricted diet since the regular egg and regular bagel group exhibited no significant changes. We’d add that many people that follow a Primal Blueprint type diet generally eat fewer calories naturally as a result of upping fat/protein (which increases satiety) and decreasing carbs (which avoids the insulin roller coaster and related cravings).

Based on these findings, the researchers conclude that an egg breakfast helps overweight adults lose more weight and feel more energetic than those who ate a bagel of equal calories. Speaking to the mechanism behind the findings, the study’s lead author suggests that “the increased satiety and energy due to eggs helps people better comply with a reduced-calorie diet.”

If you’re reading at home and thinking “well that’s all well and good, but I haven’t had a whole egg in years,” consider this: The researchers note that between the groups, there was no discernible difference between total cholesterol, high density lipoprotein cholesterol (HDL), low-density lipoprotein cholesterol (LDL) and triglyceride levels. In addition, a registered dietitian and chef drafted to comment on the study noted that “nearly half an egg’s protein, and many of the other nutrients, are found in the yolk, so make sure to eat the whole egg for maximum benefits.” And this speaks nothing of all that golden fat goodness in the yolk.
Posted by Recovox at 8:54 PM