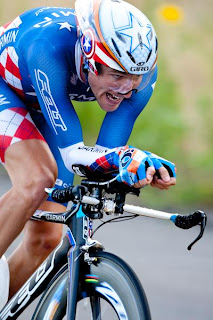 The current US professional time trial champion, Dave Zabriskie (Garmin-Slipstream), is using the six-stage Tour of Utah to prepare for a fourth consecutive victory at the upcoming championship event held in Greenville, South Carolina next weekend.

"Yes, it is the plan to get the cobwebs out of my legs before nationals," said Zabriskie. "I can definitely feel some today."

Zabriskie placed second in the Tour of Utah's opening prologue, only one second behind stage winner Brent Bookwalter (BMC Pro Cycling Team). The prologue stretched over a 4.5-kilometre circuit, a relatively short distance compared to what traditionally favors Zabriskie. The second time trial will be held on a 14.5-kilometre circuit at the Miller Motorsports Park in Tooele on Friday.

"I try to go as hard as I can every time trial," said Zabriskie. "When I was out there today I had so many thoughts going through my head like 'oh man, I'm getting spanked right now.' I just forgot that it hurts everybody and it didn't turn out as bad as I thought it would. But, definitely the longer time trial is going to suit me better, I would imagine."

Zabriskie took some much needed recovery time after completing the Tour de France. With the exception of starting Clasica San Sebastian early this month, he has not competed since the Tour ended in July.

"I did San Sebastian but I dropped out," he said. "That's why I wanted to do this race. It's been very difficult for me to get out on my bike. Trying to get back into a routine has been difficult, to travel back here."

Last year's US professional championship's 33.4-kilometre time trial saw Tom Zirbel (Bissell Pro Cycling) place second to Zabriskie by a mere five seconds. When asked if racing the Tour of Utah gave him an opportunity to test his legs against Zirbel before next weekend he said with a smile, "yes, for sure."
Posted by Recovox at 9:05 AM