Horner ready for the Vuelta a España 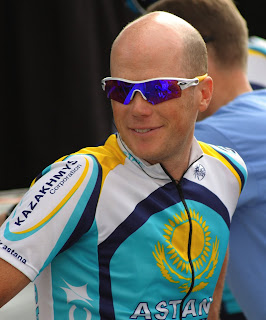 After an injury-plagued season and missing out on the Tour de France, Chris Horner is ready for the Vuelta a España, starting Saturday in Rotterdam, Holland. Horner crashed out of the Giro d'Italia in May, fracturing his left leg in a collision involving two other riders. It was the second serious injury for Horner this year after he fractured his collarbone and a rib in the Tour of the Basque Country in April.

"I took two weeks completely off the bike to let my broken leg heal. I did one week easy after that, and then headed to Aspen to start training with Lance [Armstrong] and Levi [Leipheimer]. I built up from there, and was 100 percent in the week leading up the Tour de France. Basically, I just really paid attention to what my body was telling me and used that as my guide for training," Horner told Cyclingnews.

However, Astana's Horner missed out on a place in the team's Tour de France line-up, despite training under the impression that he was preparing for the race. "After not making the Tour team, I began planning on the Vuelta and then extending my season with the late classics, since my mid-season was pretty light," Horner said. "I'm hoping to have a solid ride at the Vuelta. [I'm] going for a good overall result and/or stage wins."

Horner recently raced the Tour de l'Ain where he led the race heading into the final stage before succumbing to a barrage of attacks from Cofidis and losing the leader's jersey to Rein Taaramae. Despite that setback, Horner is looking forward to ending his season on a strong note, adding that he's more than willing to work for Alexander Vinokourov, an ex-Astana rider, who may start the race.

"My fitness is coming along. I had a few races recently to use as tune-ups for the Vuelta, and things are going pretty well," Horner said. "I'm happy to do my job for the team, and if that includes Vino, and he is our team leader, then I am happy to work for him."

Horner remained tight-lipped over who he will ride for in 2010. Now 37 years of age, Horner has ridden for Astana for the last two seasons but with Armstrong setting up his new RadioShack squad rumours have been circulating that Horner could jump ship and join the seven-time Tour de France winner. Horner did confirm that several teams had been in contact but wouldn't specify who. He did add that he would be keen to ride for Armstrong. "My aims for next year are the same as they are every year - race my bike and hopefully do the Tour."
Posted by Recovox at 10:43 AM