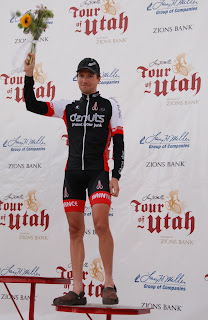 Dave Zabriskie, who resides in Salt Lake City, had previewed the 4.5-kilometre prologue course prior to race day and also knows many of the decisive climbs held throughout the stage race. He is without his Garmin-Slipstream team-mates this week and will be racing under the banner of his company name DZ Nuts - a chamois cream.

“I checked out the course yesterday and today just to see how they did the entry and the exit,” said Zabriskie, who will start stage one wearing the Best Utah Rider jeresy. “It was a nice course that ran beside the capital buildings with quite a few fans out. I’m really happy to be here. I wasn’t sure how it was going to go down being a ProTour team and luckily I have this company, similar to Lance having his company, so I wore this attire.”

He admitted that not having team-mates will make a tough stage race even tougher. Although he is in the company of the Felt-Holowesko Partners-Garmin U23 team, the young counterpart to the ProTour team Garmin-Slipstream, he assured that they would not be working together.

“It’s been laid out to me quite explicitly that that’s against the rules,” he said. “But it’s nice for me to see the younger guys and if I can push them in the right direction, but, they’re racing really well.

“There is never an easy race but, if there were any race to not have team-mates this is it because there aren’t any long valleys were a team would do a full chase on the front,” he added. “A lot of it is real mountain top days.”

The race will continue with stage one’s 137 kilometre road race beginning in Ogden and finishing in Salt Lake City. The stage features two significant ascents and nearly 2000 metres of climbing in total.