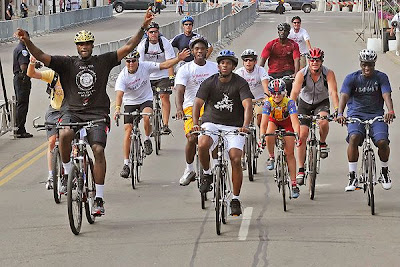 The U.S. Olympic teammates and close friends rode through the city's streets Saturday as James hosted his annual "King for Kids" charity bike-a-thon. James and Paul pushed the pace in the lead group of bicyclists, pedaling past James' former high school, St. Vincent-St. Mary, and the city's zoo on the 8-mile route.

The event ended a busy three days in Akron for James, who screened a new documentary, "More Than A Game," the story of how he and four childhood friends from the inner city achieved their dream of winning a high school national championship. James was scheduled to travel to China on Saturday to promote the film, which will open in the U.S. in October.

On Friday, James made sure he watched his beloved Dallas Cowboys, who opened their new $1.2 billion stadium with a 30-10 win over Tennessee.

"They looked great and that place is awesome, but they better raise that Jumbotron," said James, referring to Tennessee rookie punter A.J. Trapasso's kick that hit the bottom of the massive video boards over the field. "I think he might have tried to do that on purpose, you know, be the first one."

James is excited about seeing Dallas' pigskin palace and will get a chance when it hosts the NBA All-Star game in February.

Along with Paul and others, James spent much of the weekend with Darrius Snow, a 19-year-old from Atlanta who was rewarded by Nickelodeon for helping kids in his crime-infested neighborhood with a surprise trip to Ohio to be a guest of James.

Snow was abandoned by his mother when he was 2 years old. However, he became the first in his family to graduate high school and will attend Voorhees College in the fall.

Snow, who was overwhelmed by the weekend's activities, was also given a scholarship as part of the TeenNick HALO Awards, a show produced by Cannon which will premiere in December.

"It's people like Darrius who have truly inspired people, and their stories need to be told. Not only have these people overcome their own obstacles, but they've turned around and given back to make things easier for others."
Posted by Recovox at 9:00 PM