Manual Prado, the third man on the 2008 Leadville podium 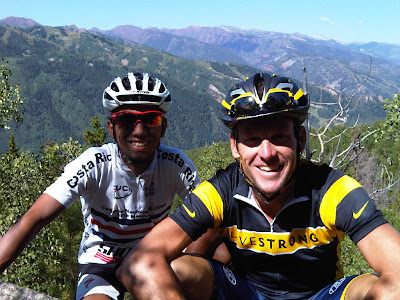 Depending on how you look at it, Manual Prado came within one and a half minutes, or 35 minutes, of the win at last year's Leadville Trail 100.

By the time Prado (Sho-Air-Specialized) crossed the line in downtown Leadville, race winner Wiens and second-placed Lance Armstrong had finished their post-race interviews and were looking for a ride home.

But Prado's third place was a lot closer and a lot more impressive than it seemed.

When Armstrong accelerated on the brutal climb to the 100-mile race's turn-around, only Wiens and Prado could stay near. The rest of the small group that rolled into the base of the climb soon disappeared back down the hill.

"The pace was OK at first, medium tempo," said Prado, who became the Costa Rican national mountain bike champion this spring. "Lance went to the front and rode his tempo and I went with him, but his pace was just slightly off what I could maintain."

Prado slowly gave ground to Armstrong and Wiens. "I was losing one or two seconds every 100 meters. I tried very hard because I knew if I could stay with them I'd have almost a free ride back to the finish."

Prado reached the turn around four minutes behind the pair. But the former freestyle BMX pro knows how to descend. "I've never had to worry about the technical side of the sport," he said. He closed the gap to one and half minutes by the bottom.

"I took a lot of risks on the descent, and then I tried to bridge on the flats. I could see them up there, taking pulls, and I had no one. I couldn't bridge and I rode by myself all the way back. It was a long way, I was lonely out there."

Prado did not have support at all the rest stops, so he skipped one rest area, but was forced to stop at the last one to take on water and food.

By working together, Armstrong and Wiens broke the course record by 13 minutes, coming in a 6:45:45. Prado came in at 7:20, seven minutes ahead of fourth placed Ethan Passant.

This year Prado, 28, is much better prepared. Still only in his second year as a pro mountain biker, he has matured as a racer, competing in his first World Cup events in Quebec this summer. He considers his national title win his finest victory, and he will proudly wear his country's colors on Saturday.

The Orange County, California, resident has been training at altitude in Aspen for ten days. Last year he only arrived at altitude three days before the race. He's been riding the course, checking out conditions and considering race strategies. He will have full support at all the aid stations this year, thanks to his coaches at Carmichael Training Systems.

In Aspen, Prado has enjoyed a few training rides with Armstrong, who he fully expects to win Saturday.

"I realized (Wednesday) that he's basically not my race, he's so strong ... beating him would be like coming in second at the Tour de France, it would take that kind of ride."

Prado is expecting Armstrong and his allies to force the pace in the first half of the race. "Lance is Lance, he always wants to make sure he has 100 percent chance of winning. It's all fine if he is able to do it," he said.

Riding with Armstrong and his buddies has got Prado pumped up about the race. "It's going to be a great battle," he said.
Posted by Recovox at 6:59 PM