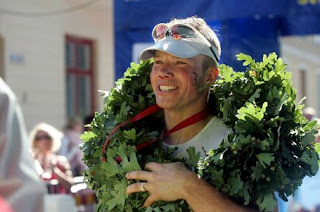 It was 3 years ago since I raced my last Ironman, it was Ironman UK and I finished 2:nd. The race itself went well but the weeks after that race my body slowly started show serious signals of fatigued but I had more plans for the season and tried to ignore them, so my fatigue just grew deeper and deeper and 3 month later I couldn’t even move out of bed, I was seriously overtrianed and burned out. What I didn’t know then was that it was going to take almost 3 years before I was strong enough to be on an Ironman start line again.

It was in January earlier this year where my body started to be strong enough so I could do some good training days, but still followed by many recovery days, but as the winter and spring went by I have been able to train a little bit more and my fitness have slowly grown.

The last weeks training leading up to the race had gone well, I had got some very good workouts from my long term friend and training buddy Gordo Byrn to get myself in my best shape possible.

My last minute preparation went well and I felt very relaxed and ready so when the gun went off at 7 am I was happy to finally be moving. The swim was 2 laps on a 1930 m course. I got into a good group after a few hundreds meters but due to the waves I lost the group in the end of the first lap and swam the 2:nd lap by myself, overall the swim splits were slow due to the waves and current but I was a little surprised that I used 1.01 for the swimleg and I lost some more time then I expected to the guys in front but didn’t care to much about that as I just tried to focus on my own race. The bike course was a 30 K out and back loop that we rode 3 times, so 180 K total. We got to meet each other many times and I saw that I just lose some time to the race leader Ted As but was closing in or kept the gap to most other guys. I rode very controlled and kept my HR between 140 to 145.

I quickly fell into a comfortable pace and put the K:s behind me. After 10 K I ran myself into 2:nd place and I just felt better and better, after 2 of the 3 loops I was 7 minutes behind the race leader, and as I felt like my 2:nd place was safe as no one was closing in from behind and I decided to give it a go and try to catch Ted in the lead. I knew I had to close most of the gap going out to the last turnaround as I knew that when he was going to try to speed up the last leg home to the finish when we saw that I was closing, so I put the hammer down and ran hard out to the turnaround with 7 K to the finish. I was now only 1.38 minutes back, and just as I thought he would do he kind of panicked and speed up as much as he could, but I manage to catch him with 3 K to go, and just when I caught up op him he tried to drop me by doing a last surge, but by now my adrenaline was pumping so I had no problems to follow, and after 300 to 400 m I was able to put in a surge and I got a small gap, and when this happened I just kept running as hard as I could and the gap grew quickly, but even if people on the side of the road said my victory looked safe I was in some kind of out of body experience and just kept running hard, it’s funny how it works, when you run along in some kind of medium pace you feel every pain in your feet and muscles, but when you come in a situation like I was in now you don’t feel anything at all, you are just so focused on pushing yourself that you don’t feel anything or nothing can disturb your focus. I don’t remember so much from these last K:s running, I just kind of woke up when I had crossed the finish line and I was so happy, it’s still hard for me to put my feelings in word (and it’s not because English is my 2:nd language ☺) . It has been 3 long years of suffering from overtraining, adrenal burnout, by long-time girlfriend Kristy Gough death…. It have just felt like it would never end, and even if a victory like this doesn’t change some things it does feel like it’s a little revenge for the things that I have gone through over the last years and Kristy will always have a special place in my heart.

It also shows that if you really believe in what you are doing and want something very badly you can achieve it even if the odds are working against you.

Even if I of course was very happy to be winning the race, get the Gold medal in the Swedish Championship and set a new course record in a time of 8.26 in this 15 year old race the biggest victory was still just the fact that I have gotten my health back and was able to finish an Ironman again, and hopefully I will be able to finish my Ironmans again in the future and if I place well and break records that will be a big bonus ☺ ☺. If I can just keep training and racing with my heart instead of my ego the results will come too !!

Now it’s almost a week since I past that finish line and I’m starting to be able to set back and relax a little, the media exposure here in Sweden have been good after the race as none really have thought I would be able to come back to the top of the sport when I got so badly fatigued and sick. Now I’m just enjoying some easy weeks before I will get into a training routine for an adventure race in China in the end of September with a Swedish team, will be a lot of fun. After that race I will probably take an end of the season break before I start my training for next year and my international Ironman comeback.

I want to finish this report by sending a big hug to my family, friends, fans, sponsors and everyone else that are supporting me, even if it was myself that did the work on race day it wouldn’t have been possible for me to be there if it wasn’t for the you in the support group, so Thank You, I’m so grateful for your support.

Race with your heart !
Clas
Posted by Recovox at 8:51 AM