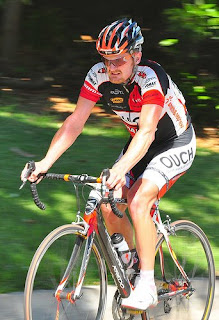 According to Floyd Landis of the OUCH Pro Cycling Team Presented by Maxxis, the last time he was even on a basketball court, let alone practicing three-pointers, “was probably when I was 15.”

This may not bode well for Landis in his three-point shootout with second-team All-NBA point guard Deron Williams of the Utah Jazz this Friday. “But,” Landis adds, perhaps with tongue planted in cheek, “cyclists are usually really good basketball players, so I’m not concerned.”

Landis and Williams will challenge one another in their respective sports at Miller Motorsports Park this Friday, August 7 at 6:30 p.m. local time. MMP is located about 30 miles west of Salt Lake City in Tooele, Utah, and the event is open to the public.
Landis and Williams will both don an OUCH Presented by Maxxis kit and take each other on in a time trial on the raceway. Williams will then challenge Landis to a three-point shoot out.

The event is a precursor to the 2009 Larry H. Miller Tour of Utah, which Landis and seven OUCH Presented by Maxxis teammates will be contesting August 18-23.

“I’m always game for a good challenge” said Williams, who was a member of the gold medal-winning Team USA at the Beijing Olympics last year. “I’m the consummate competitor, and going up against Floyd will be a lot of fun.”

Landis intends to show Williams no mercy on the bike. “No, I won’t be taking it easy on Deron,” he said. “I’m pretty sure he won’t show me any mercy either.  And if he does, he’ll probably make more shots accidentally than I will.” For the record, in his 34-game playoff career, Williams has made over 40% of his three-point attempts.

When asked whether he thought it would be easier to do a good time trial in the midst of an important race like the Larry H. Miller Tour of Utah, or bury a three-pointer with two seconds left in the game, down by one, and some guy in your face, Landis noted, “TTs are very intense, high pressure situations. There’s nowhere to hide. I imagine it is very similar to taking a shot at the buzzer.”

Aside from taking part in the event to help promote the race, the contest will also serve a practical purpose for Landis. The time trial portion of the competition with Williams will take place on the same course that will be used for the Stage 3 ITT of the Tour of Utah.

“It’ll be really good to get a look at the TT course,” Landis said. “Last year the race came down to the TT, so you don’t want any surprises on race day. I’m really looking forward to checking it out.”