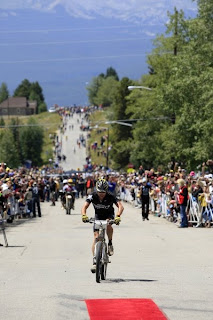 Lance Armstrong (Mellow Johnny's) won Colorado's Leadville 100 on Saturday, knocking more than 15 minutes off of the old record, about a half hour ahead of six-time winner Dave Wiens.

Armstrong rode about 60 miles alone off the front, finishing with a nearly flat rear tire.

Armstrong ally Matt Shriver helped drive the pace in the early miles, powering a group of eight along the relatively flat mid-section of the course and into the base of the turn-around climb. Shriver hung on, despite problems with his cleat, to finish third.

"Matt was making everyone suffer except Lance," Wiens said after the race. He said the early pace was the fastest he's ever seen. Trek's Travis Brown, also an Armstrong ally in the race, lost contact with the leaders early in the race but chased hard to rejoin the leaders on Columbine.

Besides the pace, a cold rain was hurting the leaders, and Wiens stopped briefly before Columbine to grab a jacket and gloves.

Armstrong never attacked but rode away from the front group at the beginning of the climb.

"I looked back and there was no one there but Shriver," Armstrong said. "I kind of had to decide if I wanted to continue alone or wait for the other guys. I knew it was risky to go alone."

Armstrong decided to continue, in part, because of the cold. "I wanted to ride hard because I was starting to freeze," he said.

Armstrong quickly built up a huge lead on Columbine, reaching the top more than 11 minutes ahead of Wiens, who, after his quick stop, passed the other early leaders on the climb.

From there it was familiar territory for Wiens, who has ridden alone for the second half of most of his victories, the exception being last year when he and Armstrong traded pace most to the way back.

For Armstrong, it was less familiar territory. After the race he couldn't remember when he had ever raced alone for so long. "I would rather have not (solo'd for so long)," he said. "In hindsight I wouldn't do it again."

Armstrong however increased his lead, comfortably riding the difficult Powerline climb without putting down a foot, crossing its summit about 18 minutes ahead of Wiens, who walked part of the climb.

In an odd remembrance of last year, Armstrong got a slow leak in the final ten miles, much as Wiens did last year when Armstrong was chasing him back into Leadville.

Wiens rolled in at 6:57:02 and said that although the early pace was painful, he felt strong the whole day. "My race was really hard the whole way. But it's a great race, I wouldn't trade it for anything."

Wiens said he was very nervous before the start. "I've been nervous as hell for the last, I don't know, year?" he joked.

He said he was unfazed by the end of his six-year winning streak and record. "Streaks are made to end and records are made to be broken," he said. The 44-year-old did say he is considering taking a somewhat less serious approach to the race next year.