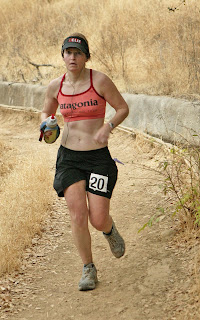 I toed the start line of the 2009 Headlands 100 Miler on Saturday, August 8th. The race started at the Marin Headlands at 7:00 A.M. with overcast skies and mild temperatures.

This race course has over 20,000 feet of climbing and descents over the 100 miles with 4 twenty five mile “washing machine loops” clockwise and counterclockwise. Much of the course I have run in other races such as Miwok 100K, Headlands 50K, and Pirates Cove. However, I didn’t quite know how the course was configured and what fun I was in for all day and night with these four loops. I was ready to embrace the challenging terrain, the monotony of running loops, the mental and physical toughness and the sheer brutality of running 100 miles.

As I began the first 25 mile loop, I was feeling strong and confident. It was important for me to get my fueling and hydration started immediately to sustain my body for the long haul. I simply enjoyed the views and ran my pace, power walking the hills and running the flat and downhill sections. I felt solid but was struggling to find my mojo and get in to a nice rhythm. The first part of any run or race is always hard for me to get in the game. I also took a fall about 90 minutes in and gashed up my left leg and hamstring. I prayed that this fall would not limit my chance to continue. As I made my way to the last aid station on the loop, I finally started to relax and smile. As I approached the end of the first loop, I took a reading of my watch and realized I had run a bit faster than planned (4 hrs 32 minutes) but the effort level felt conservative. I was in good shape knowing that my goal was to come in to the 50 mile point at ten hours.

Heading out for Loop 2, counterclockwise, I realized I was leading the women’s race. I made a pact with myself to keep it going exactly like this for the rest of the race. ☺

I also wondered if this direction would be any easier? I quickly found out that the up’s and down’s were equally as challenging in reverse. I floated in and out of packs of runners (the 50 mile event runs simultaneously with the 100 mile event) and engaged in conversations with others which helped to mentally distract from thinking too much. My friend Carla taught me an acronym named “STAR” which I constantly remind myself; Stop Thinking And Run. The conversations and people made the time fly by on the second loop. My fueling and hydration were on and my stomach continued to feel solid. At Mile 46, I was getting excited and really looking forward to seeing my friends at the 50 mile mark. I would re-fuel, pick up my friend and pacer Tom Flahavan and feel like a new woman. As I ran downhill to the start/finish area, I felt awesome. I was incredibly pumped to see everyone. Mike Savage, my crew chief was there with his wife Mellyn, along my friend Angie Pozzi, Lee Mckinley and Tom Griffen. My pacers, Tom Flahavan and Clark Whitten were very encouraging and helpful as they helped me prep for the next loop. Lee took a few pictures and had a few laughs watching me take my singlet off. Seeing all my friends was a huge mental boost for me. I was also told that my Dad was en route to the race and he would see me around mile 54. I was pysched to see my Dad at mile 55.

For most of the third loop, I felt as if I were running on a cloud. My body and mind felt strong and powerful. As we made our way clockwise on the loop, I saw my friend George coming in to finish the 50 miler and Trudy going for her 75 mile race. Seeing both of my friends put a huge smile on my face. Shortly after, Tom and I saw the second place woman. I immediately asked Tom, “how much time?” Tom said, “thirty minutes probably”. He said, “let’s continue moving and you will be fine.” Tom brought along some of my favorite snacks; Trader Joe Cookies with icing (yum!) and Peanut Butter Pretzels. I was enjoying the array of colorful conversations that Tom and I were having on the trail. Good trail snacks, and a great conversation with your friend, what more could you ask for at mile 60?! Tom reminded me to eat, drink and a few times took the lead to keep us running strong. Every aid station, Mike, Mellyn and my Dad met us and had all my goodies ready for me. I felt like a race car in Nascar going through a pitstop. We crusied in, got new “tires” and “gas” and we were off again. The system was very efficient thanks to Mike’s knowledge and experience of running and racing ultras. I even got to say hi to my Mom at one aid station as my Dad was on the phone giving her updates. Dusk hit us about mile 65 and we needed our headlamps to negotiate the trail. As we made our way back to the beach at the start/finish area, (mile 75) I began to feel physically and mentally spent. I continued to remind myself to stay strong and tough.

At the 75 mile mark, I refueled with an In N Out Burger and said good bye to Tom and picked up my next pacer, Clark. As Clark and I headed out for the final loop (thank goodness!), I began pumping myself up again “less than 25 miles to go, Julie, you can do this!” About ten minutes in to the loop, Clark pointed out that the next female was making her way to the beach and he estimated I had a 20 minute lead. I quickly headed to mile 80 as fast as I could. My crew chief, Mike, met us there and said he had not expected us for a bit and we were ahead of schedule. I felt relieved but I still wanted to keep the pressure on. I knew I was continuing to move well but my body was aching. Clark was incredibly patient to put up with my million questions that I asked from beginning to end. “Are you sure no one is coming?” “Are you sure?” I am certain at one point during our time together, he wanted to tape my mouth shut. ☺ The nervous energy of leading the race was coming out and I was starting to feel the pressure. I knew I had to reel it in and remind myself that “Pressure is a Privilege” as one of my favorite sports role models Billy Jean King would say and that I had an opportunity to win. I remember somewhere around mile 82 is where I really had to dig deep in to my gut and vow to push myself as hard as I could. Weakness was not an option.

For most of the loop, I remained quiet and focused. Clark kept checking in with me and just having his presence made me feel comfortable. At mile 88, Mike gave us an update that I was still at least 20 minutes ahead of the next women. I continued to run scared and not look back. Clark kept me going with his positive feedback. By mile 90, I was incredibly frustrated with the sheer brutality of the course. Another up, followed by another down; it was never ending. I felt as if I were on a roller coaster and I wanted off as I was done with this wild ride. My mental toughness was starting to fatigue and several times I needed to vent on the trail. Clark would tell me after my venting “Julie, you can do this and simply c’mon!” Somehow, I summoned the energy and thought back to the conversation with myself that weakness was not an option.

As we surged in to mile 96, I focused on getting some fuel in my body. I had a piece of pizza that I nibbled as we made our way back to the trail. The final 4.8 miles are in one word; ruthless. It’s a very gradual climb, followed by a calve burning steep climb to the top of Wolf Ridge. We actually missed the trail head and had to back track. As we climbed, I got nervous that we were off course as we had not seen a ribbon (or we had missed it). Clark ran back down the hill to check and ensure that we were in fact going in the correct direction. As he ran back toward me, Clark took a warrior fall and I felt bad. I then moved and ran everything I possibly could. I simply wanted to be done, but I also felt like I was getting a second wind. I continued to sound like a broken record of asking Clark if anyone was behind us. I refused to look. My friend Carla taught me when you are leading, you never look back. When I crested the top, I was elated. It was all downhill from here, but easier said than done as my quads and body were screaming. Clark figured we had about 1.5 miles to go. I put on some music and started the descent. I glided down the hill as fast as my legs would take me and felt as if I traversed the last 4 miles of this race incredibly well. I could see the beach and the finish were in sight. I remember the tears welling up but I told myself to stay calm and focus all the way to the end. As I ran the final straightaway, I was in awe. Twenty-three hours and thirteen minutes later, my goal became a reality. I ran 100.2 miles on a very difficult course and I won the race! The Race Director also yelled out that I broke the course record by 3.5 hours. I was simply in shock. I turned around and gave my pacer, Clark a hug and we made our way through the finish area.

As I reflected on many hours, I knew that I dug deep both physically and mentally. I set a goal, embraced the risks and went for it. I believed in myself, ran with confidence and experience and had one of the best races of my life. I could not have done this without the support of many people. My crew chief, Mike, Mellyn and my pacers, Tom and Clark were amazing. My Dad, Angie, Trudy, and all my friends (Jenny, Rich, Carla, Sandra, Monica, Trish, Christina, Pat and Bill….) and supporters at home cheering for me inspired me all day and night. They lifted my spirits and encouraged me every step of the way.

Thanks to Patagonia for the awesome trail running gear to allow me to look, feel and perform my best. Thanks to the power of Recovox for helping and promoting my recovery all through my training and post race recovery. I would not have felt as strong without the support.

Way to go, Julie! I am so happy you are doing well--and I miss you!!