Armstrong's Tweet turns out more than 1,000 riders for a jaunt around Dublin 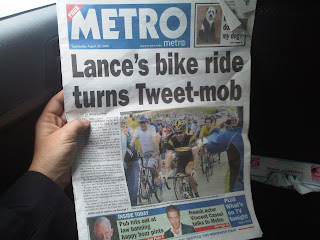 @lancearmstrong: Good morning Dublin. Who wants to ride this afternoon? I do. 5:30pm at the roundabout of Fountain Road and Chesterfield Avenue. See you there.

What started out as a simple Tweet from his mobile phone just hours earlier turned into a Lance Armstrong frenzy when over a thousand riders turned up at 5:30 in Dublin’s Phoenix Park Tuesday evening.

An army of Armstrong fans turned up from all over Ireland, and indeed from various other countries, in the hope of getting to ride with their idol, and they were not disappointed.

The seven-time Tour De France winner rode for almost two hours around the popular Kyber Pass circuit in the park, used for domestic races in the summer, and spent the whole time shaking hands, speaking to fans and having his photo taken, all while on the move.

All kinds of people turned out in Europe’s biggest public park, from club cyclists and international riders to kids and families. Armstrong had fun with them all. Normally open to traffic, the Irish Gardai (police) had closed down the six-kilometer circuit we were using and crowds thronged each corner, and all the way up the hill.

“I thought maybe there would be 50, or 60 people. But this is amazing," Armstrong said mid-ride. "I did this in Glasgow last week and as soon as I arrived at the airport the police wanted to know what I was planning. I told them I didn’t know, which I didn’t. Here, the Gardai have been great, the roads are closed off. It’s a fantastic circuit.”

Even though the pace was tranquil enough, for those who couldn’t keep up with the Texan tornado, there was ample opportunity to stop and watch for a lap and rejoin the group later on.

The climb of the Kyber Pass was soon lined with fans, who cheered as if it were Alpe D’Huez each time we came around.

“This is unbelievable,” Armstrong said as fans constantly rode up to him and asked him a question or simply thanked him for being there.

“What do you think of the great Sean Kelly?” asked one.

“He was very great, he was a great rider,” came the reply.

“Are you going to win the Tour next year?” came a question from a guy on a mountain bike.

“We’re definitely going to give it our best shot,” answered Armstrong.

Dressed in his trademark black and yellow LiveStrong clothing and wearing his orange Oakley shades, Armstrong looked to be enjoying himself as much as the fans as people of all shapes, sizes and nationalities grabbed a few seconds of talk time with him as they rode around the circuit.

To cycling fans, this was as good as it gets. But for a top professional, riding alongside some of the less stable two-wheeled fans has its difficulties. Some had obviously never ridden in a bunch before and almost nobody had ever ridden in bunch over a thousand-strong. A crash could prove disastrous, so why does he do it?

After a lap and a half alongside Mellow Johnny, diving into corners and dodging wayward riders, I ask the all important question. “Look Lance, I seem to be going pretty well here for the last lap or two. How about a contract with Radioshack next year? I know I’m a bit old at 40, but ...”

“Nah, you’re not too old,” smiles Armstrong. “We like old guys on our team. Like I said earlier in the week, I think we’re gonna have to sign a couple of ten year olds to lower the average age ... I think we got a couple of spots open.”

With that I pulled over and gave somebody else a chance to chat. For Irish cycling fans, the day they rode alongside Lance Armstrong in the Phoenix Park will remain with them for ever. For me, it could be the start of a glittering, if brief, career in the ProTour peloton. I wonder if RadioShack do size Large jerseys?

@lancearmstrong: Thanks Dublin!! What a great park and a cool ride w/ all of you. I heard a 1000+ came out. I'm speechless. Gotta love a good bike ride!!
Posted by Recovox at 4:04 PM