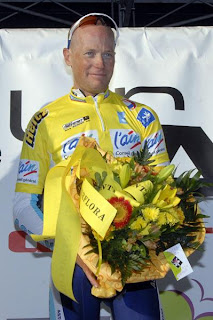 American Chris Horner is poised to take his first European stage race victory after securing the overall lead of the Tour de l'Ain on Tuesday.

After finishing second in the morning's 103km road stage finishing atop Mont Jura, the Astana rider placed third in the afternoon time trial behind stage winner Alexander Vinokourov - a rider who may become an important ally in the final stage on Wednesday.

Horner leads the race lead by 19 seconds over AG2R's Ludovic Turpin, and the politics which kept Horner off of his Astana team's Tour de France squad may now help him secure the overall victory on the daunting final stage which finishes on the Col du Grand Colombier - an 18.3km climb that ascends 1255m from Culoz - averaging 6.9% and topping out at a 14% gradient.

Vinokourov is riding the Tour de l'Ain for the Kazakhstan national team, yet the same country also backs the Astana team. After Vinokourov hinted that he may help Horner tomorrow, the American explained that it makes sense for the two teams to at the very least avoid working against each other.

"Certainly we're in a position that it wouldn't make much sense to chase each other down," Horner told Cyclingnews. "We have a strong team, and we're all good climbers ... but I certainly wouldn't complain if a little help came!"

Vinokourov lost 3:45 on the morning's stage to Mont Jura before going on to win the time trial. The Kazakh rider has made no secret of the fact that he has been trying to complete negotiations to regain his spot in the Astana squad, and hinted after the time trial that he might help Horner on Wednesday.

"It looks like he's riding really well," Horner said of Vinokourov. The fact that the 'Vino' has just returned from a doping ban was not something Horner cared to comment on.

"I spent too many years worrying about that, and finally gave up. Worrying doesn't make you ride any better. I talked to him before [his ban] and have talked to him since, and he was a nice guy then and still is."

The overall win in the French stage race would be a nice confidence boost for Horner, who was not selected for Astana's Tour squad after he dropped out of the Giro d'Italia with a fractured tibia.

The 37-year-old has few European victories to his name: he has taken one stage of the Tour de Suisse (2005) and twice led the Tour de Romandie (2006, 2007). His role has mainly been as a top mountain domestique for riders like Cadel Evans, Alberto Contador and Levi Leipheimer.

His next big goal for the season will be the Vuelta Espana, but he would not speculate if Vinokourov would be on the team by then. "It's not my job to comment on that, but I would like him on the team, for sure. It never hurts to have another strong guy on the team."
Posted by Recovox at 2:50 PM