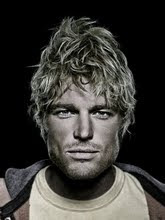 Anyone who wants to stereotype German triathletes as a bunch of serious, training-is-everything, kill-the-bike-hang-on-for-the-run, live-sleep-eat-drink Ironman exercise addicts needs to meet Maximilian Longree. Someone forgot to explain to the 28-year-old defending Ford Ironman Louisville champion that Ironman racing is supposed to be serious.

Longree first appeared on the Ironman picture in 2005 when he started to tear up the amateur ranks. He went 8:41 to finish as the top amateur in Kona in 2006, then turned pro in 2007. He finished third in his debut pro race at Ironman Austria. He was interviewed at the finish line by Peter Henning, Ironman's Vice President in charge of television, who was so impressed by Longree that Henning walked away from the interview and promptly told me that Longree was “the real deal.”

Henning made that comment in part because Longree is an incredible athlete, but also because the guy is an incredible character. There isn't a joke this guy won't go along with. Last year during his television interview with Henning, Longree said that he was looking forward to a cheeseburger right after he crossed the finish line. Right after he won the race Henning appeared with a monstrous burger.

“The worst part was I could only eat half of it,” Longree joked at today's presser. “The media wanted to talk to me so I had to leave the rest. I hope I win this year – I'll make sure to eat the whole thing.”

Longree didn't hesitate to joke with his fellow competitors today, either. He gave fellow race favorites Luke McKenzie and Raynard Tissink a picture that they can stick on their stems. “It's a nice picture of me from the finish line in Couer d'Alene – it's a sticker that they can put on their stem in the race,” Longree laughed after the race. “I want them to remember that I will be behind them and coming fast.”

Longree is quite happy to have fun with his competitors and they're quite happy to laugh along with him. Right after the press conference he planned on grabbing a coffee with McKenzie. “Some of the German guys tend to be more serious,” Longree said. “Before the race we can have some fun. I can look in everyone's eyes before the race. Sure we have to battle on race day, but after the finish line we have to be friends.”

As fun as it all is, Longree knows that he's a swim away from competing for a top position in Kona and is ready to do the work to get there.

“It's something I have to work on,” he said. “I can go with the guys on the bike. If you want to do well in Kona you have to be with the lead group. I'm 28 years old. The next step is to get my swimming better and to hold my running or make it a bit faster. I have to work hard for that like every other athlete.”

Henning was right – Longree is the real deal. Not only can the guy race, he's making all the pre-race stuff lots of fun, too. Lest you think that he can't ever be serious, though, here's what he had to say when asked what it's like to hear that someone like Peter Henning figures he's “the real deal”

“To hear something like that from Peter Henning is amazing,” Longree said. “He's a really good guy. If someone like him who knows the sport is saying that, it really really motivates me and I think about those words every day.”

Longree has a great ability to balance the serious side of the sport with a fun-loving attitude that is adding some great life to our sport – whether he gets to eat that cheeseburger as Sunday's race winner or not.
Posted by Recovox at 10:27 AM