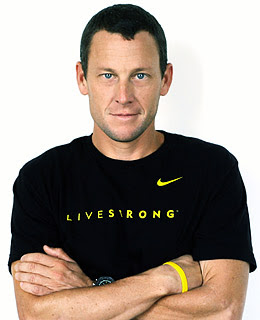 Lance Armstrong has rated his comeback season as a 7 out of 10, noting his consistent performances after three years away from the sport but admitting disappointment in not reaching his fullest potential. In an interview with Eurosport, the seven-time Tour de France winner left no doubt about his ambitions for the 2010 season with his growing RadioShack team. Third place in this year's Tour de France was a solid performance, but Armstrong is aiming for his eighth yellow jersey in Paris in the coming season.

"It was a long year since the comeback in Australia," Armstrong commented. "I think I was solid in the majority of races I did. I finished top 10 at the Tour Down Under and the Tour of California.... Then, I had my crash."

"I felt better at the Giro," he added. "I had never done [the Giro] so I didn't know exactly what to expect. I think I can be satisfied with my performance at the Tour de France, and satisfied to be on the podium. It probably was better than what most people expected, but it wasn't quite what I had hoped. So, no more than a 7 out of 10."

Armstrong announced recently that the new RadioShack formation would debut at the Tour Down Under next season, and the team is quickly taking shape around the core management structure from the US Postal and Discovery Channel days. Johan Bruyneel is expected to manage the team along with the majority of the support staff currently working with Astana.

"There could still be some changes," Armstrong noted. "I'm sure we're going to have a very strong team. I don't know if we'll win every race, and I'm not sure we'll win the Tour. Alberto [Contador] has shown that he's the best rider of the moment in the grand tours, but we'll be coming with a strong team and a unified, unique, and honorable approach."

Clearly the greatest Tour de France rider in history is eager to reclaim his position as undisputed team leader in the sport's biggest event. With the dust settled after an exciting Tour this summer, Armstrong appears less hesitant to admit to tensions with his Astana teammate and Tour winner Contador.

"I think there was definitely some real tension," he said of the team's Tour ambiance. "But it wasn't just a tension between the two of us. There were others involved and there was more than one dinner where the ambiance was not exactly pleasant. But that's OK."

"We did our jobs and it finished well. Next year the situation will be completely different and I'll try once again to win the Tour."
Posted by Recovox at 8:43 PM