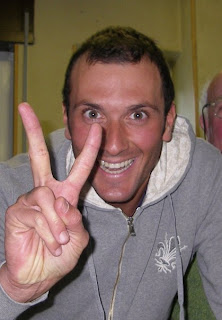 Hello everyone! I have been racing in Poland and Italy since I last wrote. My objective is to build towards my first participation in the Vuelta a España (and hopefully a win).

Last diary I talked about a "softer" programme for next year's Giro d'Italia. Well, I am also applying that to the Vuelta a España. The Tour of Poland was the perfect place for me to re-start my season.

"I had to always try to confirm myself prior to the Giro because I did not exactly know my rivals' level of fitness."

I trained at altitude in Livigno, Italy, before Poland. I arrived in Poland and the race organisation immediately impressed me, which made me happy to be there for my re-start.

Ballan took an impressive stage win in his World Champion's jersey and went on to win the overall. I was happy to see him win and look forward to the World Championships this year with him.

My ride in Poland was not impressive, but it was the "soft" return that I wanted. When I returned to Italy I hit the mountains again, training at altitude for eight days in San Pellegrino (the Dolomites). The training was ideal for Spain's big climbs, but not what I needed for the hot and sticky Italian one-day races last week.

Hot and sticky, but ready for the Vuelta

I was a little shocked in Tre Valli and Agostoni. I had been training in cool temperatures and not the 40°C I found back at sea level. I hit back in the Trofeo Melinda Saturday.

Giovanni Visconti won his second race after Agostoni, but I placed fourth. I did not race for the result, but for the feel of the race, above all on the climbs. I was never going to win ahead of Visconti and Garzelli at Melinda, but it was a step ahead with respect to the other races.

My work is now finished for the Vuelta, I just need to re-find my freshness and benefit from all the work I've already done. There is a big difference heading into this race compared to the Giro, I had to always try to confirm myself prior to the Giro because I did not exactly know what the level of my rivals was.

The Giro left me with a feeling of how the others are going. Now, especially in this last week, I am able to follow my own feelings, not the SRM metre.

Who will be the top rivals at the Vuelta a España? They will be the usual suspects, six or seven riders that have the ability to win a Grand Tour. I will watch out for Alejandro Valverde, Cadel Evans, Samuel Sánchez, Robert Gesink and Andy Schleck, if he races the classification. But what's important for me is to not think of all the others, but to race at my maximum.

I watched Schleck and Evans closely at the Tour de France last month. Andy showed that he matured from the last year and he will be able to go for the win in the next years.

Then there is Lance Armstrong. What can you say about him? It is all amazing! He is still stronger than all of his past rivals and can battle with the new faces to win the Tour. Third was impressive.

Pellizotti did very well to let the classification go and fight for the climbers' jersey. It was a great show and an honour for Italy, it is always hard to win that jersey.

I read how he would like to race the Giro next year as sole captain and then I would be the sole captain for the Tour. The team managers have to work this out over the winter, it is a little early now to plan it, though. We have always had a great relationship, as you saw at the Giro d'Italia. We will work out a plan and win the races.

Talk to you soon. We can catch up on my progress in the Vuelta and my thoughts on the Worlds.

Ivan Basso
Posted by Recovox at 10:26 AM