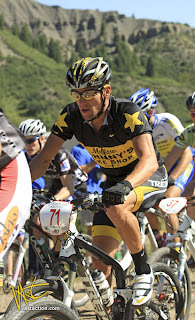 Lance Armstrong is hoping a strong field will help deliver him to a victory in record time at this Saturday's Leadville Trail 100 in Colorado.

The Astana rider told us Thursday that while he hasn't recruited a team for the race, his sponsor Trek has sent a squad to Leadville, including former pro Travis Brown. Armstrong is looking to them and to other top riders to drive the pace in the first 45 miles or so of the out-and-back course.

Besides Armstrong, Brown and defending champ Dave Wiens, other top riders include MonaVie-Cannondale's Tinker Juarez and cyclocrosser and Fort Lewis College cycling coach Matt Shriver. MonaVie-Cannondale's Jeremiah Bishop is registered but not expected because of his injuries at the Intermontane Challenge last month.

Chlouber said he also allowed in a late entry at Armstrong's request: Len Zanni, who finished third behind Armstrong and Jay Henry at the Colorado mountain bike championships last week. Zanni told VeloNews that he was racing for himself, not as a pacer, at Leadville. "If I am part of the lead group, then great, but I'm going to try pretty hard to ride my own race," he said.

Manual Prado (Sho-Air-Specialized), third place last year, has been training at altitude in Aspen for more than a week and is looking for a better ride this year. But Prado has ridden with Armstrong this week and said he does not expect to beat him. "He's basically not my race, he is so strong. He is going to be very hard to beat from my perspective."

Last year the pace was relatively mellow in the first half — reaching the Twin Lakes feed zone at mile 45 about three minutes slower than the year before — yet Armstrong and race winner Dave Wiens worked together in the second half to break the previous course record by 13 minutes, setting a new mark of 6:45:45.

Armstrong figures if he can ride the first half faster this year, a sub-6 hour winning time is within reach.

"To be honest, I haven't actively recruited anybody," to help set the pace, Armstrong said. "But Trek has riders who will be here ... if Trek wants to put fast riders in the race, it's not bad for me."

"If you have a group of guys who can work together — and that's a big if — we could go under six hours."

It's a big if because the race starts with several stiff climbs that could shatter the front of the field before it hits the flatter road sections where a paceline would work.

Armstrong said that if a group of strong riders does come together to trade pace in the first half, he wouldn't expect his chief rival Wiens to take pulls. "I would expect Dave to sit on. I mean, if it's just he and I, I would expect him to work, but if there is a big group working together, it would be mutually beneficial. We all benefit from a deeper field."
Wiens ready for anything

Seven-time winner Wiens said he's looking forward to seeing a different kind of race this year. "I don't mind seeing the race at the front evolve into something more tactical. The course lends itself to that," he said Thursday.

The always-modest Wiens said he is in comparable form to last year, but said if the pace is brutal from the start, he might not be able to hold on.

"I could be in time trial mode the whole way," he said. Wiens picked Brown — a former rival on the NORBA and World Cup circuits in the 1990s — as a favorite.
'Every man for himself'

The opportunity to use team tactics disappears after the Twin Lakes station, when the race starts up the Columbine Mine climb, the hardest ascent on the course, to the turn-around point at 12,600 feet.

"Once you are midway up Columbine, it's every man for himself," Armstrong said.

Armstrong, coming off his third place in the Tour de France, could take huge time out of anybody on the Columbine climb, but that would leave him alone with 50 miles to the finish. "If you could get someone over Columbine with you, that would be best," he said.

That concern may be why Armstrong conceded that he did, in fact, recruit one rider for Leadville: his Astana teammate Levi Leipheimer. But Leipheimer is still recovering from his broken wrist suffered at the Tour de France.

"Levi faked his broken wrist so I wouldn't wipe his ass at Leadville," Armstrong joked.
Posted by Recovox at 6:56 PM