Missing the Tour de France, preparing for the Tour of Spain 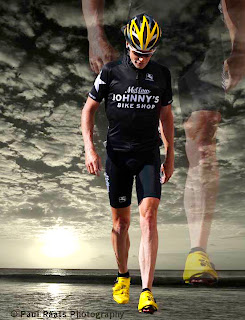 As the Tour de France was winding down, so was my vacation. It was time to start training as I began looking toward the second half of my season.

While Lance Armstrong, Levi Leipheimer and my other Astana teammates were riding the Tour de France through July, I had done mostly easy rides, only getting in a few longer days a week, around San Diego and those were followed with trips to the beach and Padres games with the kids. Trying to be both super dad and super bike racer at the same time was taking its toll. I was riding just enough to get by, but I wasn't getting much real rest. Soon, I finished the vacation with a few days back home in Bend before dropping off the kids and heading to Chicago.

The Chicago Criterium would be my first race back. It also would be where my legs -- lacking training and race intensity -- suffered.

After the race, I stayed outside the city, in Crystal Lake, Ill., for a week with Michael Zellmann, from SRAM, one of our sponsors. He was kind enough to put me up for the week and tolerate me breaking in his couch and messing up his pillows. It was there, during the week in Crystal Lake, that my training for the second half of the season really started. I spent every day logging good miles and maximum recovery time before riding the Tour of Elk Grove.

That race, also in Illinois, went smoothly, with no broken bones and a fifth place finish in the general classification. With a 100-mile technical road course, the race gave me the intensity that was lacking in my day to day training. The moment I finished ended my mood was better than it had been the month before, and I was looking forward to the upcoming European campaign.

After Elk Grove, I headed back to San Diego and continued training for four more days before catching a flight to France for this week's Tour de l'Ain. Surprisingly enough, my form in that race was much better than I had anticipated, and after the third stage I was fighting for the leader's jersey going into the time trial.

On paper, the time trial was only about five miles long, suggesting the suffering would be short lived. But during the race it felt much longer and more painful than I had expected. I almost collapsed after crossing the line, but taking the leader's yellow jersey helped me quickly forget the pain.

The next day -- Wednesday -- was going to be the hardest stage of the race, as well as the last. It finished on a 10-mile climb up Colombiere, which averaged more than a 7 percent grade, with sections as steep as 14 percent. It was going to hurt. Still, I had no jitters the night before, knowing I had a strong team to help me control the pace throughout the day and up to the finish.

As we started the last climb, the Astana team went straight to work. Jose Luis Rubiera -- or Chechu, as we call him -- set the pace at the bottom. After he pulled off, I was left with two teammates for the remainder of the climb. At that moment, I was still confident that we could control the race to the finish.

Rein Taaramae, a new, up-and-coming young kid, who was still relatively unknown to me, had other plans. He attacked three kilometers into the climb and built a 30-second gap on us quickly. At that point, I still wasn't too concerned, thinking that it was way too far to the finish for him to make it solo. However, five kilometers later, about eight kilometers into the climb, he was still gaining time and I was starting to grow concerned.

He was riding better than I had expected, and I was feeling worse than I had hoped. My teammate Jesus Hernandez finished his pull at that point, and Danny Navarro took over the pace making for me.

Danny's pace had destroyed the field and left only myself and three other riders, but at the same time was putting me on the limit. Cross-eyed, I yelled at Danny to slow down a bit, to allow me to recover, also realizing that it was going to cost us more time. Danny pulled until just under four kilometers to go. At that point, he told me he had nothing more left, but I didn't respond, hoping to get a few hundred more meters out of him. The second time he told me he had nothing left, I knew it was now or never.

With just more than three kilometers to go, I got on the front myself, giving everything I had to bring the young kid back, with his two Cofidis teammates sitting on for the ride. As I crossed the line, I fell off the bike, completely exhausted and well beyond the limit of my current fitness. With the time bonuses Taaramae gained by winning the stage, I lost the overall lead by 25 seconds.

I was completely frustrated and upset with myself immediately after the race. But then, about an hour later, I began to realize and appreciate the week's results and accomplishments. With not much more than a week and a half of training -- interrupted by long flights from Chicago to San Diego, and from San Diego to Geneva, Switzerland -- I really couldn't complain about my form. The next morning, as I did laundry, the success hit me as I was hanging up a yellow jersey and a green jersey side by side on the drying rack.

It had been a good week and a great step toward the Tour of Spain.

That race -- the last of the cycling season's three grand tours -- starts in just more than two weeks.
Posted by Recovox at 10:06 PM