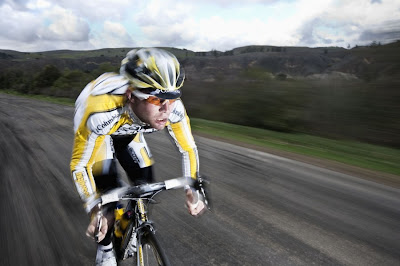 Mark Cavendish earned his twentieth victory of the season on Sunday with a win in the Sparkasse Giro in Bochum, Germany. The 24-year-old Brit outsprinted former teammate Gerald Ciolek (Team Milram) to take the 180-kilometre one-day race.

"It's an impressive result for Mark," said team manager Rolf Aldag. "He had a tough Tour de France and he's been winning all season, but the victories just keep coming. And this was not an easy race at all. It was held on a tough little circuit, with two short but hard climbs and then a fast descent to the finish, and on top of that it was raining most of the day.

"A break of five guys got away but in the last lap and a half we managed to bring things back together for Cavendish. He seems to be totally unbeatable in the sprints right now."

Despite having only five riders on the start line, Columbia-HTC covered all the attacks and kept the race under control for Cavendish. "It's really impressive when you consider we've just come out of a really successful Tour and all of the riders who took part for us in this race had taken part in the Tour," said Aldag. "Some guys just lose their way a little if they've done well there, but not Mark and not our team. So even if it's not a huge surprise when Cav wins a sprint, this victory shows he's still focused and concentrating on winning."
Posted by Recovox at 7:53 PM