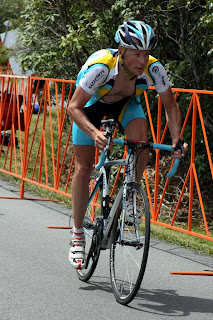 Today is the last day of rest before the Tour of Spain starts with Saturday's opening prologue. The Astana Team arrived in the Netherlands on Wednesday and has spent the time since then relaxing and previewing the prologue course to prepare ourselves for the opening battle. The team has come with a strong group of riders, including Haimar Zubeldia, Alexander Vinokourov and myself riding for the overall win for Astana.

At the hotel, the atmosphere around the team is fantastic. The season so far has been great, and the team is riding high on the successes we've accomplished so far. This has made us all feel relaxed while still remaining motivated to keep the momentum rolling in the third grand tour of the year.

Personally, my road to the start of the Tour of Spain has been a little bumpy. During my first race back in Europe a few weeks ago, the Tour de L'Ain in France, I had some problems with my breathing. The problem seemed to appear earlier in the summer during intense training, but having never felt this type of sensation before, I put it down to lack of form. Despite feeling like I knew the probable explanation for my problem, I continued to pay close attention to it each time it reappeared.

On the last stage of Tour de l'Ain, the symptoms reappeared and were significantly worse than what I had experienced before. Amid the intensity of the last climb, combined with the effort of trying to hold on to the race lead on the final day, the symptoms seemed to be magnified ten-fold from what I had previously felt in training. After talking to the team doctor following the race, he recommended that I fly directly to Belgium for an asthma test. With the Tour of Spain coming up very quickly, Dag, our team doctor, didn't want to take any chances with my breathing before the big race.

In Belgium, I met with a specialist who put me through an allergy test as well as an asthma test. After only three rounds of the asthma "provocation" test, I had lost 26 percent of my breathing capacity and my wheezing could be heard across the room. The doctor stopped the test, and immediately diagnosed me with asthma. I had considered asthma as a possible cause for my symptoms from the beginning, but the diagnosis was still surprising! However, I was relieved to have a concrete answer for what I had been experiencing, since that gave me a real problem to work on and ways to solve it. Dag immediately filed the paperwork for what's known as a "therapeutic use exemption" with the UCI, hoping that I could get approval to start the necessary asthma medication before the Tour of Spain began.

After arriving back in Spain, I started on antibiotics for a sore throat that just would not clear up, and got UCI approval a few days later to start using the asthma medication. I had just under two weeks to get everything under control at that point, and between the jitters I felt from the new asthma meds and the lingering cold that I just couldn't shake, it seemed like it was going to be very close. Luckily, my form was already more or less where it needed to be, so I could train a little less and sleep a little more to give my body the time and recovery it needed to get back to full strength.

A week later, with one week to go before the Tour of Spain began, everything was falling into place. I was off the antibiotics, the cold was gone, I was well rested, had caught up on sleep and I had still managed to get some good training in. I could see that the asthma medication was working well, as I was finally able to get in the big efforts in training that had been missing since the breathing symptoms began. I had finally found the 150 watts that had been missing from my life lately, and it was just in time -- not to mention a huge relief!

With all of my ducks lined up and ready to go, it was time to fly out once again. This year's Tour of Spain is starting up north in Holland, where we will spend the first four days of the race. If the wind blows hard I can expect to need all of my form to survive, and with extremely narrow roads and lots of technical turns staying at the front will be the main tactic of every team in the race. If it rains everyone better throw in some crossed fingers, too, to help us all make it through in one piece! But with a little luck and some diligence we will all make it to see the first Spanish stages in a few days where the real tests will begin.

Thanks for reading! Until next time...
Posted by Recovox at 2:44 PM