A Brush with Greatness in NorCal 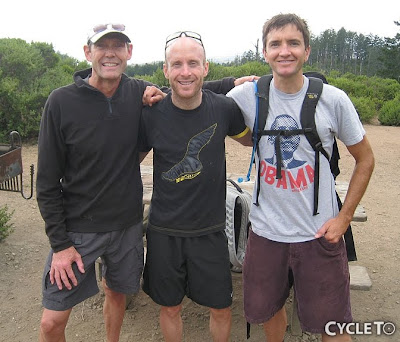 This is one of those "Only in California" stories.

Last week, three avid Bay Area cyclists were out camping near Pt. Reyes, one of the most scenic spots on the Pacific Coast. All of a sudden, they looked up and saw two of the best bike racers in America coming their way...on foot.

Astana's Levi Leipheimer and BMC's Scott Nydam were both out for a rehab hike not far from their homes in Sonoma County. Levi is still nursing the wrist he broke at the Tour de France, while Nydam continues to recover from a bad crash at the Tour of the Gila earlier this year.

The two cycling stars stopped to pose for a few photos, take-in the spectacular scenery, and chat with their fellow travelers.

Alameda dentist Dr. Dave Johnson was one of those travelers.

I was there with my son Kyle and Joe Mariscal. I had to wake Joe up at the campsite. He didn't believe me at first!

Levi said he’s been riding the trainer because can’t afford a fall on the wrist. Thinks he might be able to be back out on the bike in about two weeks.

They were just completing a loop that was about 7-9 miles. They had come for the scenery and the exercise, although Levi had been on the trainer earlier that day. They realized Pt. Reyes was and only 30 minutes from home. I don’t believe either one had been there before.

We talked about 20 minutes and took pictures. We talked about the upcoming Gran Fondo in October. I told him I’d be riding and he said, “See you then” as they departed. They asked us for directions to get back out to the trailhead. What a nice couple of guys.

As they walked down the trial toward the trailhead some other hikers pasted them without even noticing who they were. It made me realize that outside the cycling community Levi is still incognito. When we met some other friends a couple days later on the hike I told them we had run into Levi Leipheimer. They said, “Who?” I said “Lance.” They knew who he was. Oh well.
Posted by Recovox at 9:48 AM