Alberto Contador To Stay With Astana 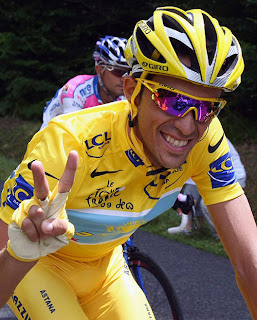 The Spanish cyclist Alberto Contador is resigned to staying connected to his current team, Astana, with whom he has an “existing contract,” one which prevents him, for the time being, from moving to another team, although he has “quite a few” offers. He also states that a team with Fernando Alonso will not emerge at this time, because it is something that must be done “a long time in advance.”

“If I hadn’t had an existing contract, I would not have stayed with Astana. Quite a few teams are interested in me, but I’ve got one more year of contract and we’ll see how it works out,” said Contador on Telemadrid’s “The Early Circle.”

In this sense, the Pinteño referred to rumors about a team created by Formula 1 driver Fernando Alonso. “We’ve talked a lot with Fernando Alonso about this possibility, but it’s something that must be done a long time in advance. Next year, God will say,” he said with caution.

Contador recounted, concerning his rivalry with Armstrong over victory in the Tour, that he focused on “not entering into comment and not losing my cool and concentration,” and that there were people who were on his side who behaved “very well.”

“Other people, not so well,” he emphasized.

Understanding Armstrong
At any rate, the winner of the three grand tours understands the behavior of the Texan “completely.”

“I knew that he wasn’t just going for a walk, and I saw that in December when were we at training camp, but I was clear about things and I knew that my goal was the same as his, independently of what went out in the press,” he said.

The Spanish cyclist declared that no one “explicitly” communicated that he was the leader of Astana, which he could see in his team’s “conduct and in the manner of working.”

“Armstrong didn’t talk to me. That was a big problem, because when there’s tension between the team’s two main riders, then everybody else is also in an uncomfortable position. I tried not to make tension, but it was difficult,” he said.

In spite of everything, Contador underscored that being on the podium “next to Armstrong, but on top, was a prize.”

“It was a historic photo and I was happy that it happened.”

Time to rest
Looking at the near future, Contador has chosen “to rest” after a “very challenging” Tour, and not to defend his crown in the Vuelta a España, which began on Saturday. “Riding two grand tours makes for a lot of whiplash,” he stressed, assuring that he thinks that the passage of the Spanish tour through Holland and Belgium will go well, because “the public will turn out in droves and they know how to appreciate it.”

Contador doesn’t picture himself at the World Championships, either. “Probably not, it requires a lot of training for only two days,” he said.

Finally, in reference to doping rumors, the Madrileño stressed that he had “heard worse.”

“In this Tour, I went through 17 antidoping controls—we had a lot of controls. Every day you have to report your whereabouts to the hour, because they can show up at any moment to do a control. I’m not against any of it, because it’s all for winning credibility for the sport,” he said.
Posted by Recovox at 8:52 PM