George Hincapie goes to BMC for 2010 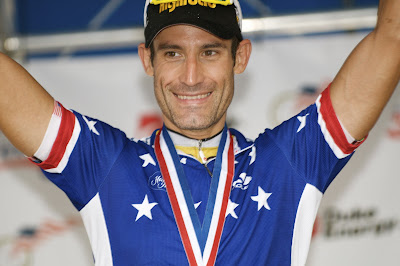 ROAD Magazine had an exclusive interview with the recently crowned national road race champion George Hincapie and he explains why he switched to the BMC team. Look for the full interview in the upcoming issue of ROAD.

ROAD: Columbia-HTC is an American team that seems to be winning races every weekend. It seems to be a good fit for you. Why leave and go to BMC?
George Hincapie: Columbia has been an amazing team for me. Some of the best two years of my career with some of the most memorable moments, obviously I had a lot of memorable moments with Lance and the Tour, but with Columbia from the beginning of the year to the end we were winning races. For me it is hard to leave the team. But at the same time it is a huge opportunity with BMC. For starters, Jim Ochowicz is like a father figure in my cycling career. He gave me my first pro contract when I went to Motorola, and has been there for me ever since, even when I wasn't riding for him. So the fact that I can work with him again is already a huge plus for me. Secondly, I kind of like being in a role of helping younger riders and help a team that is not one of the best in the world, but become one of the best in the world. I've been on the best teams in the world my whole career basically. Postal and Discovery, we were winning the Tour de France and killing everybody. Now on Columbia we are killing everybody. I would like to switch roles. I only have a couple of years left so I want to switch the role and see if I can get a smaller team to that same level. It's a new challenge for me. Thirdly, we have an opportunity to promote our brand (Hincapie Sportswear). They are going to use our clothing which is a big thing for our company. It was also a family decision and and wasn't just about me. I included my whole family in this decision. It's going to be fun and I'm excited about it.
Posted by Recovox at 9:09 PM