Breakfast With the Champion 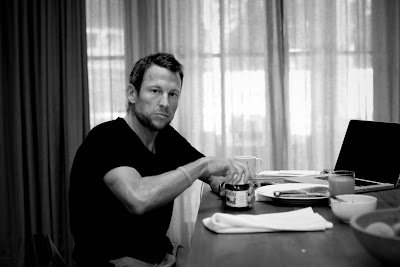 Armstrong at home with his morning pick-me-up, Nutella. Coincidentally, the drug testers showed up at his door moments later to take an out-of-competition sample. (Photo By Grayson Schaffer)

Seven-time Tour de France winner Lance Armstrong, 37, has lately taken up in Aspen, living in a smart mod-Victorian a few blocks off the main drag. According to residents, he’s become something of a local fixture: Here he is training for this Saturday’s Leadville Trail 100 mountain-bike race with Aspen hardmen Max Taam and Len Zanni. There he is having sushi at Matsuhisha, with his girlfriend and their eight-week-old son, Max. And all the while, he Twitters—skipping press conferences altogether and releasing everything from news of his son’s birth to his rebuttal (“Hey pistolero…”) of comments made by this year’s Tour de France Winner, Alberto Contador, directly to his 1.7 million followers.

Saturday, Armstrong rematches Dave Wiens, who beat him at last year’s Leadville 100. He had an Outside editor over for breakfast to talk about Leadville, his new sponsorship deal with RadioShack, and his plans for the coming year.

Outside: How is it that the Leadville 100 has become the second most important race on the planet?
The Tour was the training camp for Leadville. (laughing) Having been here for the last three summers, it’s just right there. And everyone talks about it.

Are you going to beat Dave Wiens this year? Maybe break the six-hour mark?
Dave’s not going to be easy to beat. He’s been doing some good racing, like in the Trans-Alps, over in Europe. And you’ve got to do things right at Leadville. You can’t have problems, like flats, and you’ve got to respect the distance and climbing. We may not break six hours, but I’ve been feeling good going over there and riding.

We heard you’d assembled a mini-team to pace you. Levi Leipheimer’s still injured, right?
He’s out. They’ll be locals, but they’ll probably be on my wheel. I just think it’s better to get to the turnaround as quickly as possible if you really want to break the record. After the turnaround, there’s no advantage to having a peloton. It’ll just be one, two, maybe three guys and hike-a-bike after that.

Where have you been training?
I’ve been up the Columbine and Powerline climbs [the two hardest at Leadville] a few times, and then riding here. [The state championships at] Snowmass last weekend started at 9,000 feet and climbed to 11,500— Dude, you happen to be speaking to the Colorado state champion.

I’m amazed that guys with day jobs can give you a run for your money.
I think the key is that they have great lifestyles. They eat well and don’t have a lot of stress in their lives. Len Zanni [of Backbone Media, in Carbondale]—super-fit guy—has a full-time job and two kids and he says, “I’m going take it easy this week.” And I’m like, “What do you mean this week?”

It seems like you’ve been living and eating well, too, judging by your Twitter feed.
Trying to. It’s healthy for us to be here—especially now with the baby. Anything past 9 p.m. is out of the question. You know, it kind of simplifies life, which is good.

Let’s talk RadioShack, or rather The Shack, as they now want to be called. Did they come to you?
Yeah. We had a firm looking for sponsorship and then one day, they just called out of the blue. I don’t know how the rebranding lined up with their decision to do the team. I think it’s more about new blood and ideas at the company.

Have your priorities changed? It seems that the last time we talked—for Outside's February cover—you wanted to first get publicity for LiveStrong and maybe win the tour. Has the order flipflopped?
Well, we didn’t win the Tour, but I think we insulated the foundation from this economic downturn. If you look at most nonprofits right now, they just got crushed. We’ve been protected for a few reasons. The main reason is that we’re doing good stuff, but there’s also the added attention. Winning the Tour didn’t happen because a couple of guys showed up who were better. One of them was a lot better. The decision to race again was based on looking at last year’s Tour and doing the math on last year’s times. I think we can safely say that my performance this summer would have been close to winning last year’s Tour. The math wasn’t off. It’s just that Contador was that much better. And tactically, I got put out a little in stage 17, at Grand-Bornand. I should have gone in the beginning. Once you’re off 20 seconds, if you try to cross the gap, you’re bringing guys with you. That’s not cool.

Do you think Contador would have done you the same courtesy?
I’m not even gonna get into that.

Have you guys talked since the pistolero Tweet?
It was like, You go left. I go right.

Who are you bringing with you to the RadioShack team? What about George Hincapie?
He’s already committed. Has been since before we got our funding.

Anybody you can name?
No, but the core of the team is the one we want to keep.

So is part of your thinking that you can win next year’s Tour by placing better guys around you than Contador can?
I think we can have a better team. But it’s not rocket science. You have to avoid mistakes and accidents. To win, I’ve got to climb at a certain consistent speed, my tempo has to be fast, and I’ve got to get my time trial back. I can’t accelerate like I did before. And what you saw from Contador this year—I’ll never beat that. I wouldn’t have beat that before. But, who knows, that might have been the form of a lifetime. It’s not important. What’s important is that we show up and try hard. People understand that I’m an old guy. Nobody expects 2001 again.

But old guys always have bigger bags of tricks.
Assuming I had guys like Levi and [Andreas] Klöden—guys like that, you can play. But with a guy like Alberto, you can play all you want and you won’t win.

Are you going back to triathlon? Should we look for you at Kona?
I trained at Kona before the Tour Down Under. I was there. I’d like to go back and try some Ironman events. Not just Kona.

Do you try to come off the bike with a big lead?
I don’t know that that’s necessary. I think the recipe would be to ride conservatively and really plan on running. You could ride your ass off and get 10 minutes—but you’ll lose 20 or 30 in the run.

So instead, you conserve energy and come off the bike feeling better than everyone else.
That’s the idea, anyway. It works when we’re talking about it now, but then you get there and it all changes. That’s why I need to do a couple. I need to do some half-Ironman events—get my swimming back. I don’t know that I can win. Some of these guys go quick.

It doesn’t seem like you need to win to age gracefully.
I want to stay fit and have a great lifestyle. I don’t necessarily need to win the Tour, win the Ironman, or run 2:20 in a marathon. It’s also about what we do at the foundation and with the team. People look at that and think, Man, look at any other retired cyclist; they’re damn sure not out there doing that.
Posted by Recovox at 7:11 PM