Kara Goucher and Tera Moody collapse during individual sessions with reporters to talk about disappointing finishes in the Berlin competition. 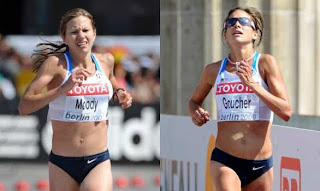 American Tera Moody, left, finished 28th and compatriot Kara Goucher was 10th overall in the women's marathon at the IAAF World Championships in Berlin on Sunday.

While standing in the mixed zone area to talk with media about her disappointing 10th-place finish in Sunday's World Championships marathon, Goucher suddenly felt so weak she slowly lowered herself to the ground and was led to a nearby medical tent.

It happened next to Tera Moody while she was doing the same thing as Goucher.

Moody, also disappointed in her 28th-place run, was talking about fueling problems when her voice went raspy from shortness of breath. She collapsed in panic from an exercise-induced asthma attack and was carried to the medical tent.

"I think I'm going to pass out," Moody told medical staff around her as they rushed to get her emergency Proventil inhaler while trying to calm her down.

Both recovered and returned to speak about what happened to them in the race -- and, in Moody's case, after it.

Each fell far short of her goal.

Goucher's was a medal after she had finished third in her first two marathons, at New York last year and Boston last spring.

New York repeated itself, but not in a medal sense. Once again, Goucher could not keep down the fluids she drank during the race. Sunday, she said she threw up six times.

Goucher stayed with the leaders until they picked up the pace with eight miles to go. She lost contact almost immediately and wound up finishing in 2 hours, 27 minutes, 48 seconds, more than two minutes from the medals in a race China's Bai Xue won in 2:25.15.

"Kara was in much better shape than she has ever been," said Alberto Salazar, her coach. "If we can't figure out the fluids, it's not going to help, no matter what shape she is in."

Moody, 28, a prep star at Illinois' St. Charles High School, had conquered severe eating and sleep disorders to become an elite marathoner. She also has dealt with asthma since high school, letting her know when a severe attack is coming.

"I kind of started to see stars," Moody said of her post-race collapse. "I know when that happens, I'm going to pass out. I tried to get closer to the ground, so I wouldn't fall.

"I knew once I took my inhaler I'd be fine, but it's very scary when you can't breathe. I panic, and that's the worst thing you can do."

Moody had remained in control during the race, when the amount she was sweating alerted her to how much toll the 77-degree temperature and bright sun were taking.

"My goal was to break 2:30, but I knew with the heat I was going to have to be more conservative," Moody said.

"I'm really disappointed not to run a personal best at the world championships, because I'm in the best shape of my life," said Moody, whose best in five marathons is 2:33.54. "I started passing a lot of people, but I guess I wasn't getting any faster."
Posted by Recovox at 8:46 PM