Adrenal Fatigue - What is it? 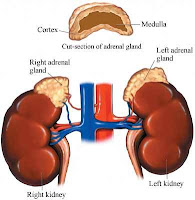 Have you recently experienced a major stress in your life, be it illness, job, death, children, etc? After this stress, have you felt as though you just cannot seem to get yourself together, or at least back to where you used to be? Are you usually tired when you wake up, but still "too wired" to fall asleep at night? Is it hard for you to relax or to get exercise? Do you find that you get sick more often and take a long time to get well? If so, then you, like many other Americans may be experiencing symptoms of Adrenal Fatigue.

Adrenal fatigue is not a new condition. People have been experiencing this condition for years. Although there is increasing physician awareness, many are not familiar with adrenal fatigue as a distinct syndrome. Because of this lack of knowledge, patients suffer because they are not properly diagnosed or treated.

Adrenal fatigue is a condition in which the adrenal glands function at a sub-optimal level when patients are at rest, under stress, or in response to consistent, intermittent, or sporadic demands. The adrenal glands are two small glands that sit over the kidneys and are responsible for secreting over 50 different hormones—including epinephrine, cortisol, progesterone, DHEA, estrogen, and testosterone. Over the past century, adrenal fatigue has been recognized as Non-Addison’s hypoadrenia, subclinical hypoadrenia, neurasthenia, adrenal neurasthenia, and adrenal apathy.

Generally patients who present with adrenal fatigue can often be heard saying, "After______, I was never the same." The onset of adrenal fatigue often occurs because of financial pressures, infections, emotional stress, smoking, drugs, poor eating habits, sugar and white flour products, unemployment and several other stressors. After experiencing many of these events over a long period of time, the adrenal glands tend to produce less cortisol, the body’s master stress hormone. Cortisol’s main role in the body is to enable us to handle stress and maintain our immune systems. The adrenal gland’s struggle to meet the high demands of cortisol production eventually leads to adrenal fatigue.

Patients with adrenal fatigue have a distinct energy pattern. They are usually very fatigued in the morning, not really waking up until 10 AM, and will not usually feel fully awake until after a noon meal. They experience a diurnal lull in their cortisol (the stress hormone produced by the adrenal gland) and as a result, they feel low during the afternoon, generally around 2-4 PM. Patients generally begin to feel better after 6 PM; however, they are usually tired after 9 and in bed by 11 PM These patients find that they work best late at night or early in the morning.

Although there no specific tests that will provide a true diagnosis of adrenal fatigue there are tests that may contribute to an assessment, such as a postural hypotension test, an AM cortisol test, or an ACTH stimulation test. It is customary for a physician to assess the adrenals together with thyroid tests to rule out insufficiency, which sometimes occurs in long-standing hypothyroidism.

Treatment for adrenal fatigue is relatively simple. Lifestyle modifications can be initiated to treat this condition. Simple changes such as more laughter (increases the parasympathetic supply to the adrenals), small breaks to lie down, increased relaxation, regular meals, exercise (avoiding any highly competitive events), early bedtimes and sleeping until at least 9 AM whenever possible can all benefit those experiencing adrenal fatigue.

A diet that would be conducive to treating adrenal fatigue includes one that combines unrefined carbohydrates (whole grains) with protein and oils (nuts and seeds) at most meals—olive, walnut, fiber, flax and high-quality fish oil. It is also important for patients to eat regular meals, chew food well, and eat by 10 AM and again for lunch. Patients should look to avoid any hydrogenated fats, caffeine, chocolate, white carbohydrates, and junk foods. Diets should have a heavy emphasis on vegetables. It may be of additional benefit that patients add salt to their diet, especially upon rising and at least a half-hour before their lowest energy point of the day. (Preferably, 1/8 to 1/2 teaspoonful of sea salt, Celtic salt, or sea salt w/kelp powder added to an 8 oz glass of water). In adrenal fatigue, one should not follow the USDA’s Food Guide Pyramid, as these patients tolerate fewer carbohydrates and need more protein.

Some herbal remedies that have been noted as possible therapies include Licorice, Ashwagandha, Maca, Siberian Ginseng, Korean Ginseng. Note: Licorice can and, if taken over time, does have a propensity to elevate blood pressure. It should not be used in persons with a history of hypertension, renal failure, or who currently use digitalis preparations such as digoxin.

Under the supervision of a physician hormone supplementation with DHEA, Pregnenolone, and Progesterone may also offer some benefits. There are several glandular extracts on the market that contain adrenal, hypothalamus, pituitary, thyroid, and gonadal that are also often recommended. Sometimes the initiation of hydrocortisone (Cortef®) may be necessary as a replacement hormone when cortisol is not being produced by the adrenals. While the initiation of corticosteroids, such as hydrocortisone may have quick and dramatic results, they can sometimes make the adrenals weaker rather than stronger. As a result, the initiation of hydrocortisone is usually a last resort. It is important to note that patients may have to undergo treatment for 6 months to 2 years.

While a cortisol measurement may be helpful to confirm any thoughts or ideas that a patient may have decreased adrenal function, typically blood cortisol levels would be tested along with blood levels of potassium, and sodium. If the pituitary gland is the cause of adrenal failure electrolyte levels are usually normal. Practitioners usually pay attention to extremely low cortisol levels, which generally diagnoses Addison’s disease—a condition in which the adrenal glands are completely depleted, also considered a medical emergency.
Posted by Recovox at 11:23 AM

I found the onset to be after children. It just got worse after each. I have found a physician who I believe is going to be wonderful. I did a ton of research here.
http://www.bodylogicmd.com/for-women/adrenal-fatigue