Battle of the best at Leadville 100 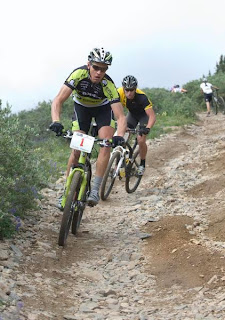 Dave Wiens has done the math.

He has counted the 14,000 vertical feet of climbing. He knows the average elevation of the race course is some two miles above sea level. He can even tell you the pace it will take to topple his course record of 6 hours, 45 minutes and 45 seconds.

And when the six-time defending champion of the Leadville Trail 100 Mountain Bike Race lines up alongside nearly 1,400 competitors at the 15th annual "Race Across the Sky" on Saturday morning, he understands he'll do so with a bigger bull's-eye on his back than anyone except the world's most famous cyclist, Lance Armstrong.

"Lance is Lance. I kind of feel as if there's a bigger bull's-eye on him," said Wiens, 44, from Gunnison. "I don't know what his motivation is. But I think it's cool that he lines up with 1,300 regular folks and does a bike race with them. Not every world-class champion like himself would even put themselves in a position to do a race likeLeadville."

Armstrong's motivation? Well, it's not as if Wiens — a Mountain Bike Hall of Famer himself — doesn't have a hunch. He beat Armstrong by nearly two minutes and shattered his own course record by 13 minutes after a hard-fought battle in Armstrong's first attempt at the dirt-road race last year.

"Wiens beat him last year, and that doesn't sit well with Lance, you know," said race director Ken Chlouber of Leadville. "I told his trainer, Chris Carmichael, that I thought Lance was just being good and letting the homeboy win. He told me: 'No way. When Lance gets on that bike, it's to win. Always.' "

This time around, the seven-time Tour de France champion is in even better shape, having recently completed his comeback bid with a third-place showing at the Tour.

Wiens isn't about to give up his title without a fight, however. The two-time national cross country champion, who retired from mountain bike racing as a full-time pro in 2004, has never lost the LT100
Lance Armstrong, left, congratulates Dave Wiens on his Leadville 100 victory last year. (Mateo Leyba, Denver Post file photo )
since first earning a lottery spot in 2003. He set the previous course record on the 100-mile course in 2007 when he knocked off Floyd Landis, the 2006 Tour de France champion who was subsequently stripped of his title after testing positive for performance-enhancing drugs.

Even Armstrong admits that the father of three and part-time trail builder wrested victory away from him at the 90-mile mark a year ago.

"I was fried," Armstrong said from the victory podium at last Saturday's Blast the Mass mountain bike race at Snowmass Village, where he was named Colorado's 2009 cross country state champion. "That was all I had. We were trading poles and I just couldn't go anymore."

Wiens believes he might have a bit more work cut out for him this time.

"If he was able to train for a couple weeks last year and push me to my limit, really, what will he be like with a full year of training and coming off the tours of Italy and France? He is a much different bike racer than he was last year," Wiens said. "I think he's on a bigger mission this year. He's taking the same approach forLeadville as he did for the Tour. He's ultraprepared."

Updates on Armstrong's Twitter page detailed him making the trip over Independence Pass to ride the toughest sections of the Leadville course twice in the past week. He's also riding a tricked-out new mountain bike he believes could be capable of finishing the ultra in less than six hours, with a team effort.
"If he was able to train for a couple weeks last year and push me to my limit, really, what will he be like with a full year of training and coming off the tours of Italy and France?" - Dave Wiens, on Lance Armstrong (Denver Post file photo)
In addition to beating Colorado's top mountain bike talent in the two-hour race at Snowmass, Armstrong has ridden almost exclusively on dirt after returning from a post-Tour vacation and before lining up wearing plate No. 2 at the start last Saturday.

And if all that qualifies Armstrong as the new man to beat at Leadville, it also makes Leadville the place to race this summer. Race applications grew by 25 percent to about 2,500 after Armstrong's debut in 2008, that despite a history of at least 25 percent of race participants failing to finish before the event's 12-hour cutoff. A webcast will stream live footage of the race at www.leadvilletrail100.com, and Citizen Pictures from Denver is producing a television show from the event.

It's what Chlouber calls the "Armstrong effect."

"He's treating us right. We want Lance to come," said Chlouber, who founded the LT100 mountain bike and foot races as a means to attract tourists to his hometown. "We love him. We tried to get (Tour de France champion Alberto) Contador to come too, so Wiens could kick his (butt) too."

With his high-altitude endurance rivaled only by his quiet humility, Wiens lets Chlouber do the smack talking for him. He's too busy training.

"I guess you could call it extra training. It's definitely different for me," Wiens said. "My sponsors at Topeak-Ergon asked me to do the Trans-Alps stage race in Europe during the last week of the Tour. It was over 50,000 feet of massive climbing in seven days in the Alps. I've never done that before. It could make me faster or it could make my legs heavy and slow. I don't see as I get older how I could be any faster than I was last year."

Still, both racers are as aware of Wiens' six-race win streak in Leadville as they are of Armstrong's seven victories in France. The only certainty come 6:30 a.m. Saturday at 10,500 feet is that both men will be there for a mountain bike race, not a math test.

"It really comes down to how much horsepower you have, and the luck you have with air in your tires and keeping your bike rolling, that kind of stuff," Wiens said. "In any competitive environment you have the opportunity to get beat. A lot of people don't compete because they have a fear of losing. But if you don't get out there, you're never going to know."
Posted by Recovox at 9:13 AM